Memories of the Mill Site Inn 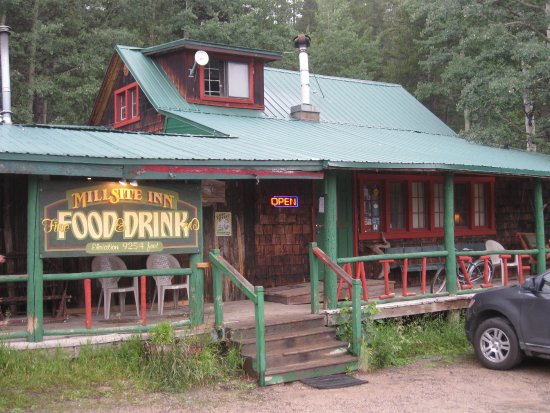 Yesterday was the end of an era.  The era of providing food and drink along the Peak to Peak Highway between Estes Park and Nederland.

The Millsite Inn closed its doors for good yesterday.  If you’ve never driven the Peak to Peak Highway, you probably have no idea what I’m talking about.

But for me, reading about its closure brought a tear to my eye.  Though I only went there a couple of times, it marked a port in the storm for me.

For four summers and one very long winter, I drove back and forth between Nederland and Estes Park five days a week.  Working as a Park Ranger at Rocky Mountain National Park, I became well acquainted with Highway 72.  My 43-mile one-way drive took me by groves of aspen trees, vistas of mountains, and more than a few wildlife.

Driving more than an hour each way on a desolate road, I would mark the time by the very few signs of civilization I would see along the way.  The Gallery at Allenspark meant I was about 25 minutes away from getting to work.

A glimpse of the Millsite Inn meant I was closer to home than I was to work, within 25 minutes of walking in my front door.

After driving by the rustic restaurant with its bright green letters and “Open” sign, curiosity got the best of me.  When I first walked in the door, I thought it was a biker bar.  And I guess in some sense it was, as it probably got its fair share of motorcyclists that stopped for a beer.

Nevertheless, they were always friendly and served a pretty good pizza there, even if it did take awhile to arrive at your table.  Like other mountain establishments, the Millsite wasn’t fancy — simple furnishings and a simple menu.  But I found it comforting just seeing the wooden porch and the lights, particularly in the dead of winter.

While an incredibly beautiful drive, the Peak to Peak Highway is quite desolate during winter.  And due to its curving roadways in and out of valleys along the base of the Indian Peaks Wilderness, cell service is pretty much non-existent.  My last chance to make a call of any kind was driving out of the Peaceful Valley.  Then, nothing until Nederland.

I always felt that if I had an accident on some snowy night, I could probably at least find my way to the Millsite and they would help me out.  I’m sure over the years, there was many a wary motorist who used their landline to call for help.

It will seem strange to drive over to Rocky Mountain National Park and see its doors shuttered.  I understand that one of the co-owners passed away this year, and it is simply too much to keep it open.  I hope they consider selling it to someone who will keep the tradition of offering food and drink alive.

Thanks for the memories!