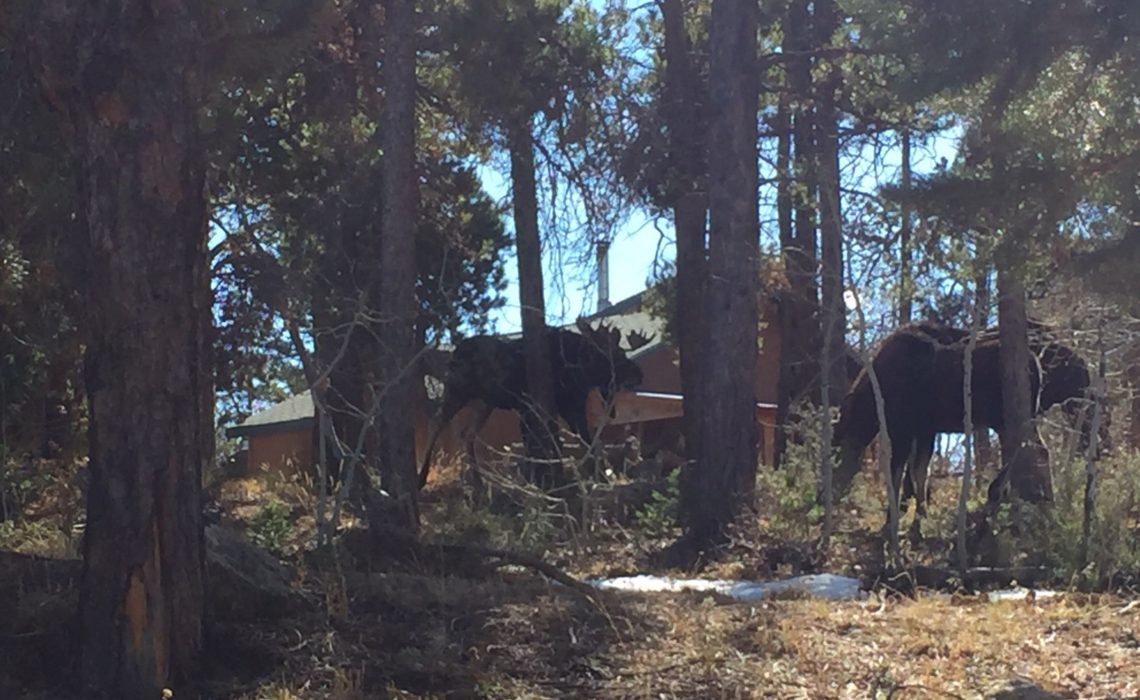 A plaintive cry cut the air during the morning hours.  What is it? I initially thought that perhaps one of the dogs had become ill and was howling out of pain.  A quick look at Logan and Shawnee just produced wagging tails, with ears pricked up.  The sound had caught their attention as well.

Then the baying continued, a long sort of groan and cry combined, lasting several seconds.  The dogs immediately ran to the window, erupting in barking.  Whatever made that sound was close by.

As I got up from desk and peered out the window, I heard it again and saw the source of the eery noise.  A large bull moose stood alongside a female.  The proximity of the two immediately provided insight as to what was going on.  These two moose were rutting, right here in our back yard.

Fall is well known as the mating time of year, but the animal that gets most of the attention is the Rocky Mountain Elk.  They are so numerous, the bugling so plentiful, and harems can number upwards of 50, it’s hard not to get caught up in their mating game.

But the truth is, that fall is a time of rutting for almost all the hoofed animals, including moose.  With moose becoming ever more plentiful around the Nederland area, it’s no surprise that witnessing the rut would become more common as well.

Like elk, moose can spar and battle over the right to mate with cow moose.  Their large antlers can break, as they ward off competition.  According to the National Park Service, larger and older males are far more successful than younger bulls.  Mature males performed 88% of all mating, and can rut up to 25 times per year.

Bulls will also use scent to mark their territory and attract females, digging a shallow pit and urinating in it.  Then they will lay in the pit, getting moose “cologne” all over their body, a sure way to get the girl.

Unlike elk, the vocalizations you hear, don’t come from the males as much as the female.  The cow moose will produce long wavering moans that can be heard up to a mile away during mating.  The only sound  a bull moose makes is more like low croaking sound.

The peak of mating season if usually late September/early October, so we were in fact treated to a rare spectacle the other day.  Once mating is over, cows and bulls will separate, with the cows giving birth the following May.

Just another reminder of the magic moments of living in prime wildlife habitat can bring to daily life in the Colorado Rocky Mountains.