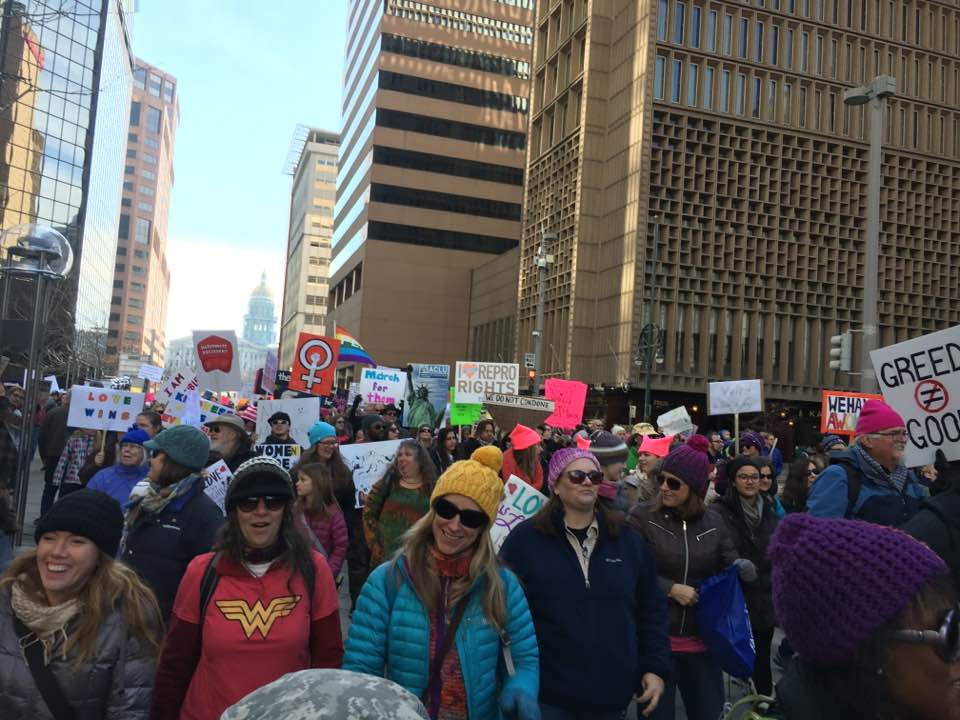 A stream of traffic flows steadily towards Denver down the Boulder Turnpike.  Each entrance ramp brings more cars.  Just a typical weekday commute?  Nope, instead a unique event in our state’s and nation’s history that brings people from all corners of the state of Colorado.

As I drive past a bus stop for the Flatiron Flyer (Boulder’s bus to downtown Denver), I get an inkling of just how many people will be joining me on the historic March on Denver.  Around 50 people are gathered at the bus stop just outside of Boulder at 7 a.m. on a Saturday morning.  Somehow the thought of all these people exercising their First Amendment rights gets to me, and a tear leaks out the corner of my eye.

Instead of taking the bus, I think I will be clever and instead take light rail at the newly opened Westminster Station on the G Line.  Bryon and I took it once before and hardly anyone was there.

Uh oh, something is definitely up…  As I near the station, I can see the garage is already full and people were parking along the street.  Women, many of them donning the Pink Pussy hats, are milling in groups, toting signs. “This Pussy Grabs Back!” makes me chuckle.

As I find a place to park a couple of blocks away and walk towards the station, throngs of people — at least 200 of them crowd the platform waiting for the trains.  And it isn’t just women.  Many men are there as well — fathers, husbands, boyfriends, grandfathers.  And children, lots of children gathered with their parents for this historic moment.

Arriving at Union Station, the scene is festive with myriads of people — young and old, black and white, Hispanic and African-American swarming about.  Walking down the 16th Street Mall felt like the march before the march as people move along towards Civic Center — signs bobbing up and down, knitted pussy ears in all directions.

Upon arriving at Civic Center Park, I try to text my friends from Grand Junction to find them.  Quickly, I receive a “failure to send” message back.  I enter the phone numbers to call them — nothing.  The thousands of people here in Denver have actually jammed the cellular network.

Despairing because I would have no one to march with, I set off toward the march route anyway.  It will be okay — I will be with others who feel as I do about the importance of standing up for democracy.  Just as I head down the sidewalk — my friends appear in front of me!

We walk towards the beginning of the march route.  It is now 9:45 a.m. and the march was supposed to start at 9:30 a.m.  Just looking at all the signs keep me entertained during the delay — their sayings and bright colors are unique and eye-catching — “Make America Kind Again” and “This Pussy Grabs Back” are two of my favorites.

Every few minutes, we shuffle five steps forward and stop again.  At this rate, the first marchers will be finishing before we even get started.  We continue to shuffle forward, and finally after several false starts, we are moving continuously.

Everyone is respectful and courteous.  Police officers appear every so often, but there is no violence or disturbance along the march route.  People appear from windows above in the buildings holding signs and cheering as well.  Every now and then a chant breaks out — “This is what democracy looks like!”  It fills me with pride to see the thousands of people who have shown up in peaceful protest on this chilly Saturday morning.  I am part of a movement.

Approaching noon, we are back at Civic Center Park.  As speakers begin to take the stage, I realize I have lost my friends.  Furthermore, my phone has died — no doubt from the endless searching for service.  I linger for awhile, but decide to return to Union Station to catch the train back to Westminster.

As I ride the train back, I sit next to an elderly woman with gray hair and a pink T-shirt on.  She looks to be in her mid 70s.  She informs me this is the first protest she has ever been to.  “Our country is too important for me to not participate.”  Wow — good for her.

This is what democracy looks like on a winter Saturday in Colorado’s capital.