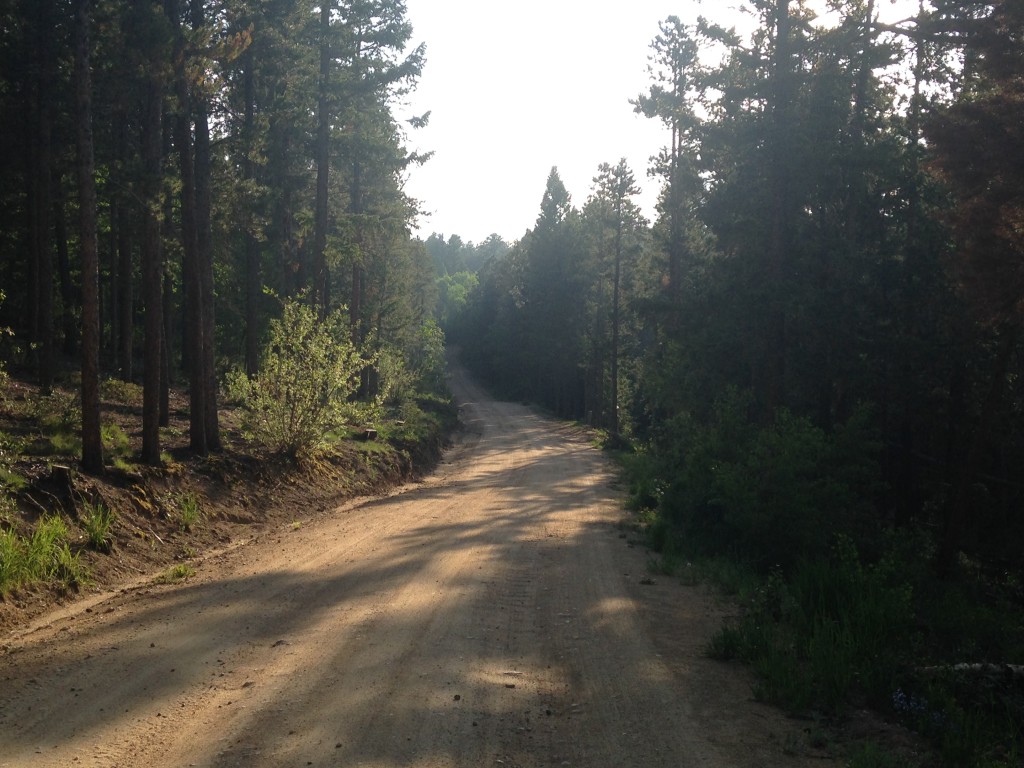 We have good friends who live in downtown Chicago who have been out to visit us at our home in Nederland.  They think that we live “off the grid” in the middle of nowhere, which seems preposterous to me as I have literally lived in the middle of nowhere when I worked at Capitol Reef National Park in south central Utah.  Nevertheless, I sometimes forget how our lifestyle can seem to those who reside in urban and suburban areas, where most of my friends live.  I was reminded once again of this, as I left for work this morning, and had to wait patiently for 5-10 minutes because the dirt road I use to drive through our neighborhood was being graded.

We live off a dirt road that is connected to other dirt roads outside of Nederland, which eventually leads either to the paved Boulder Canyon road or the paved Peak-to-Peak Highway.  The dirt road we live off of isn’t even a public, county-maintained road, which means road maintenance is entirely paid for by the people who live in our neighborhood.  That can take the form of clearing snow — we actually have a snow removal pot of money we all pay into each year — or grading.  Because we want to make sure we use our money wisely, they don’t clear snow off that road unless it is more than 8 inches.  The maintenance fund also pays for grading of the road which is a huge job, so is usually only done once, or at the most twice a year.  As you can imagine, we spend a lot of time driving on very bumpy, rutted roads.  Bryon seems to like this as he says it makes him feel “as if he is really living in the mountains.”

This network of rugged, dirt roads makes it easy to tell if someone is living in a mountain town by the cars they drive.  Here in Colorado the preferred mountain car seems to be some model of Subaru, usually with a cracked windshield due to flying rocks chipping and cracking it somewhere along the way.  As you can imagine, when you don’t even get the road plowed unless it’s more than 8 inches of snow, 4-wheel drive is pretty much a necessity.  The final determinant of a mountain resident, is the thick film of dust, sludge, or mud on the car.  I don’t think I’ve ever had a clean car since the day we moved here.  In winter, constant snow and slush gets thrown up, spring and early summer brings the mud, and summer brings a combination of pine pollen and dust.  I have tried at various times to wash the car while down in Boulder, but it never lasts more than a day.

Still and all, living off a dirt road has its benefits — you can walk down the middle of the roads with your dogs trotting alongside and no one who is driving finds it at all surprising — they just sort of slow down as you move over to one side and give you a wave.  And driving dirt roads sort of makes you slow down and enjoy the scenery, or the wildlife that you might encounter along the way.  Dirt roads seem to create a new level of civility among  people, who usually give a friendly wave to each other as they pass by each other.  And there’s nothing more peaceful than walking on a dirt road after a fresh snowfall — the only sounds being the sound of my boots as I walk along creating my own personal set of tracks.  It brings me back to one of my favorite childhood songs by a famous Colorado resident  — “Take me home country roads, to the place where I belong…”