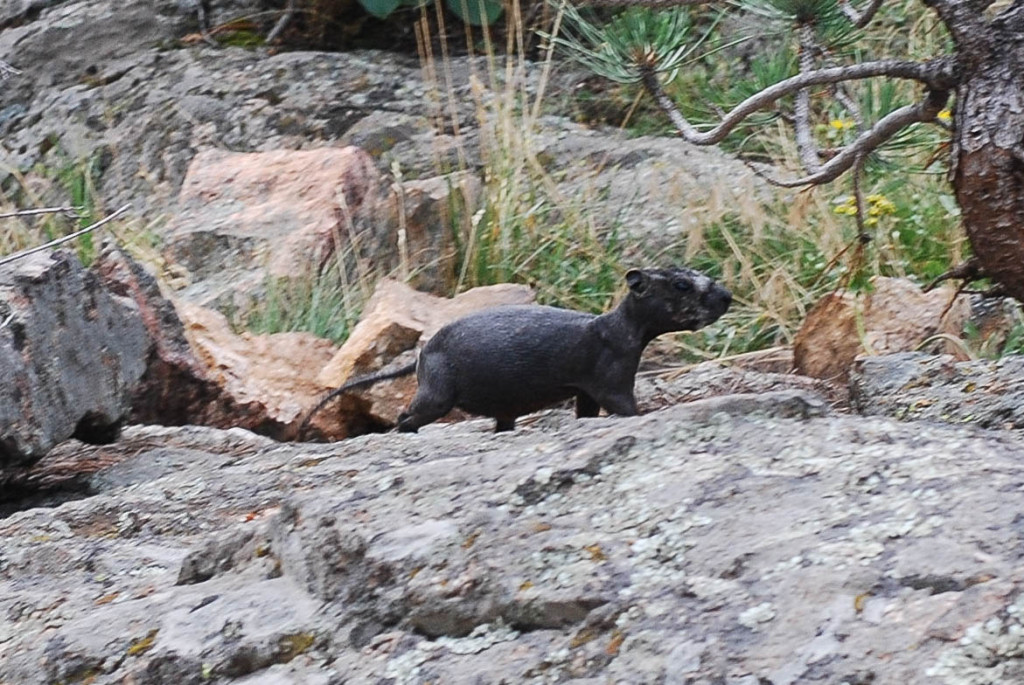 The familiar chirp of alerted me before I saw his chubby body perched on top of the rocks. The marmots were sounding the alarm as I hiked up towards the tundra. As I watched him dive in between the rocks, i reflected on a story from my Park Ranger days at Rocky Mountain National Park. I’m re-printing this story as a reminder to all of us of the negative impacts we can have on our local wildlife.

As a park ranger, people visiting parks look to you as the expert.  Because of this, I frequently get asked about something they’ve seen during their visit — an animal, a bird, a flower.  When I worked at Sequoia National Park, we were constantly getting asked, “What’s the white flower by the side of the road?”  Of course, there were upwards of twenty white flowers blooming at the time, so it made it quite difficult.  Very often, we are able to help them out, but in reality, most of us aren’t botanists or wildlife biologists, so occasionally we get stumped.

Recently, I got stumped by what seemed like a mystery creature.  While working at the park visitor center the last couple of weeks, I had been hearing about a strange creature from visitors.  Something that didn’t look like the other wildlife I had seen.

They described it in various ways — hairless large rat, bald squirrel, etc.  People kept asking me what I thought it was. But when you are trying to figure out strictly on someone else’s description, it can be tough.  I would pull out wildlife field guides and we would look at photos, but in the end we were left stymied.

A few years ago, a woman was sure she’d seen a wolverine, which is quite rare.  In fact, it turned out to be a large marmot.  Frequently, others will swear they saw a wolf, pulling out their smart phone to prove their sighting with the photo they snapped.  Nope, just a large, healthy-looking coyote.

So, the fact that several people were asking about this hairless creature perplexed me, while also making me extremely curious.  What could it be?

Today, I finally got an answer, when a couple again told me they had seen this weird creature, but in fact, had taken several pictures of it.  It was one of the ugliest critters I had ever seen.

After much consultation with rangers and the park wildlife biologist, we have settled on it being a hairless marmot.  We’re not sure exactly why it lost all its fur, although the wildlife biologist had a theory.  And its a theory that doesn’t reflect well on park visitors.  She thought it was eating too much people food, and not enough natural food.

The sad thing about this is it will probably bring about its early demise.  Marmots hibernate for up to nine months of the year.  During that time, their body temperature drops, their metabolism rate gets slow, and they got into an almost comatose state.  In order to survive during that time, they need to build up a great deal of fat.  But it needs to be brown fat, or good fat.  Fat that will metabolize slowly, and last all winter.  If they eat too much people food, they will put on white fat, or bad fat.  This fat metabolizes much faster, and they may not make it through the winter.  Add in to the situation, that this poor fellow doesn’t have any fur to keep him warm, and he likely is doomed.

Next time you are eyeing a marmot, squirrel or chipmunk that seems hungry, remember this story and give them some tough love.  Send them off to find some tasty green grasses or flowers.

Their very lives could depend on it.