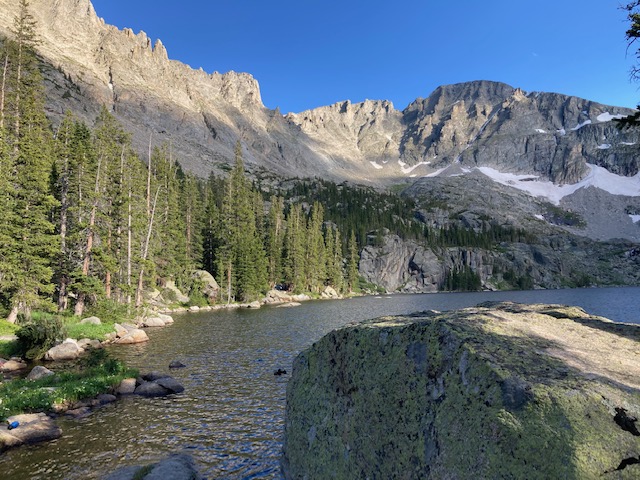 “We want to backpack the Northern Loop. Can you give us camping suggestions?”

Three years ago, I volunteered at the Forest Service office in Boulder, issuing wilderness permits. I wasn’t sure what to expect when I offered to help. But over the course of the season, from mid-June to mid-September, I learned a lot about backpacking in the Indian Peaks Wilderness (IPW).

Living in Nederland, I consider the IPW to be my own back yard. We live a mere 15 minutes from the closest trailhead. It’s one of the things I most appreciate about living here — access to scenic alpine hiking and skiing.

The Indian Peaks Wilderness is one of the most visited wilderness areas in the country. With easy access to Front Range cities and jaw-dropping scenery, it’s easy to understand why. But because of that heavy visitation, it’s one of the few to set quotas for backpacking, requiring a permit for backpackers during the summer season.

As I learned about backcountry zones, and helped people figure out their routes for a backpack, the Northern Loop kept coming up. Starting from Brainard Lake, it’s about 28-miles of high mountain passes and alpine lakes. Its popularity piqued my curiosity and I wanted to experience it for myself.

A new work schedule gave me Fridays off, and with Monday being the observed Fourth of July holiday, we put in for a permit several months ago.

But as the months and weeks went by, I felt a bit unsettled. I hadn’t done as much hiking as I’d hoped and had been a bit under the weather this past month. Would I be able to handle it?

Day one started out relatively uneventful with a 7-mile hike out of Mitchell Lake trailhead. The climbing was moderate and once it split off from the Audubon trail, the trail just rolled along at a gentle pace. Having bought a new, lighter backpack, I felt some confidence start to brim up for me. I could do this.

I looked nervously up at Buchanan Pass, it looked imposing.

But fortunately, I had a secret weapon.

Our dog Logan had accompanied us for the trip. Logan was a great dog — he loved all dogs and all people. But like many dogs, he was not without his flaws. He loved to pull hard on his leash. We had to buy special harnesses with hooks in the front to cut down on his pulling. We tried so hard to train the “pull” out of him with no succcess.

But on this day, Logie’s pulling came in handy. In the IPW,  you are required to keep your dog on leash. This can be tricky when you’re carrying a backpack and using trekking poles. My solution? To loop Logan’s leash through my waste belt.

Logan’s stalwart power towed me up the pass with ease. We got to a rocky patch with snow.

“You’ve got just a little bit more to go!” a hiker encourage me from above. One more push and voila! We had made the pass. Well, that wasn’t so bad.

Coming down on the pass presented the real challenge. Trees had fallen across the trail everywhere. Large trees with two foot diameter trunks. Beetle kill trees. Some parts had 4-5 trees all tangled together in one tree pile. This would be the case for most of the trails on the west side.

Day Three brought the long hard slow slog up Cascade Creek to Pawnee Lake. Two thousand feet of climbing with heat and humidity challenged every bone in my body. At times, I had to stop thinking I just could not go any further. Finally, when I felt I’d “redlined” my body, the lake appeared.

Pawnee Lake sits in a bowl with granite walls soaring on three sides. The late afternoon sun illuminated its rock walls, creating the perfect lighting. But the late afternoon also brought clouds of mosquitos. So many that I actually found them in my hot cocoa that evening. We could use bug repellent to keep them from munching us. But poor Logan! All he had was his paws — swatting at the bugs as they circled his head.

Not wanting to see the poor guy suffer, we put him in the tent. But then we made a fatal error. We walked out of sight from him to get water. Logan is very loyal to Bryon and me, and this was simply too much for him. He busted out through the mesh door. Now we had a very different problem. A giant hole for the mosquitos to come in.

Using a bandana, q-tips, bandaids and some ingenuity, we repaired the gap well enough to stay mosquito free inside the tent for our last evening on the trail.

Our fourth day brought sun and blue skies and one final pass to get over. Pawnee Pass is a beast. As you look at it from Pawnee Lake, it simply doesn’t seem possible that a trail would climb the steep talus. But Logie Power prevailed one more time, as quadraped power ruled the day. Logie proved agile and surefooted and he acted as the winch to pull his mistress up the trail. While the switchbacks seemed endless, we were making progress. Finally, I could see the top and summoned up my final reserved. As we got near the top, the trail leveled out through yellow wildflowers.

I had made it. My quest was done.

The Northern Loop. If you’re traveling during thunderstorm season, I encourage you to get early starts and consider hiking shorter days.

I now understand why it is a “must do” backpack in the Indian Peaks Wilderness.