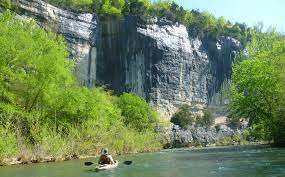 Note: This is off topic about a recent road trip.

As we turned the canoe to head down the Buffalo River, it felt like navigating a minefield.

“Go right! Hard!” I yelled out to Bryon.

Since my experience canoeing was limited, Bryon sat in the back steering. Between the rocks poking up from the low water conditions and the mass of canoes and kayaks, it felt daunting to find our way through. Sitting in front, I had a better view of the action, but there were so many people, I wondered how we would make it down river in one piece.

I’ve always known Saturday was the worst day of the week to recreate. It’s the same thing with skiing in Colorado or hiking at Rocky Mountain National Park. Which is why most Saturdays you’ll find me doing something else, like volunteering at the Humane Society.

But Bryon and I had been trying to get to Arkansas for some time. We had planned a trip two years ago, but cancelled when it coincided with a work trip Bryon had. Not wanting to give up, I remembered a Park Service friend who had worked on the Buffalo River. Some internet research brought up photos of quaint cabins in the woods and canoeing in the shadow of cliffs. For some reason, if though I love mountain living, I’m attracted to being on the water. So what was not to like?

As I tried to minimize vacation time taken, I planned it for Friday – Sunday. And thus, we ended up renting a canoe with hundreds of our closest friends on a Saturday morning in mid-May.

Crowds make me crazy. I sought a mountain home off a dirt road to get away from people and the big city. I deliberately choose lesser known hiking trails so I can enjoy more nature and see less people. The thought of spending four hours trying to avoid smacking other people’s canoes did not seem like the wilderness experience I craved. I wanted to enjoy the sights and sounds of nature. Why didn’t I think of this earlier?

And yet as Bryon and I paddled away, weaving from side to side in the river, a strange thing happened. The boats became fewer and fewer. Finally, only a group of four kayaks remained in our view. Being strong, fit people, we paddled hard, and suddenly we were around them with nothing but open water ahead. Where did everyone go?

Turned out the way to get the peace and quiet we craved was just getting ahead of everyone else. Most people, it turned out, took a leisurely pace, stopping often and paddling intermittently.

For the next 1 ½ hours, we had serenity on the river. I watched two hawks soar overhead, and a bird pick up a stick and carry it in its beak. I noticed fish swimming in the water, and how when the water got deep, it turned a deep azure blue.

The sounds of people faded away, and I looked up to see cliffs streaked with black and white. I wondered about the first people who boated this river. Was this what they saw?

Without other boats to follow, we had to figure out the best way through a rapid on our own. Bryon and I found a better rhythm with each other.

“Ok, do you think we should head right around the rock, or left?”

Being on our own even afforded our own adventure and calamity, with no one to see and judge us. As we headed towards a rapid, the canoe started to slide sideways.

Before I knew it, the canoe flipped and I was in the water. I’d lost my paddle. But I still clung to the canoe and determined I should not let it go even as the water tugged at it. I leaned against the current and side stepped sideways to the shore.

I lunged towards the blue paddle, plucking it out of the water.

“Well, at least I hung onto the canoe!”

Our pride was wounded, but we laughed it off. We walked the canoe over to the shore, tipping it over to empty it of water.

Yes, I was definitely ok.  An afternoon on the Buffalo River wiped out all the tension and worries I had been feeling the last few months.