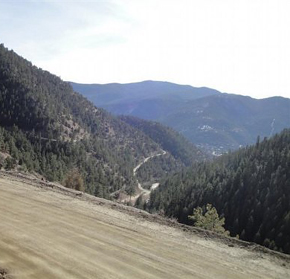 We were beginning to give up hope. Maybe we were lost.

And with that, Bryon drove the little Mazda hatchback around another switchback. The little red fox darted in front of the car. Other than that, the place seemed devoid of civilization. At least recent civilization. There were plenty of decrepit mine shacks in a state of arrested decay.

As we continued our climb up into the mountains, into the darkness, I began to wonder if we would ever make it to Boulder. We’d been driving for nine hours now since we left Grand Junction. What had seemed like a routine drive had turned into a survival of the fittest road trip.

Being new to Colorado in August, 2010, we didn’t know what traffic was like on I-70 on a Sunday afternoon. But when we hit gridlock in Silverthorne, we got a pretty good idea. In an effort to escape the traffic, we’d consulted the map (remember those?) and found an exit at Idaho Springs to Central City.

What I didn’t realize at the time is that road I saw on the map was the Central City Parkway. The rutted dirt road we were climbing up a steep canyon was definitely not that road.

Roads in Colorado are not only scenic, but very often have an interesting history to them as well.  Many of the famous roads in the state were built during the Colorado Gold Rush and mining era of the 1800s. Bryon and I became very well acquainted with this lesser known mining road during a rather adventurous trip from Grand Junction to Boulder shortly after moving to Colorado.

We got off at Idaho Springs, and as we drove down the main road, I thought maybe we’d made a mistake. Just as we were about to get back on that packed highway of SUVs, Bryon spied a small sign for Central City with an arrow pointing up a hill.

Strange? On the map, it looked like more of major road. But our desperation overcame common sense and we set off up the canyon.  Darkness had descended, so it was hard to see just how many switchbacks there were.  Every time we thought maybe we should turn around, we’d see another tiny sign, with tiny letters that said Central City, with an arrow pointing up the next hill.

Finally, after the bumpy ride that seemed to go nowhere, we crested the ridge and entered a town. A town with no people, just the eery shapes of chutes, buildings and old mining equipment. A mining town that time had long passed by — Russell Gulch.

After our up close and personal tour of a mining ghost town, I finally spied bright lights down the hill.

Ah ha, I thought, we have finally reached civilization!

Blinking neon lights, “Lady Luck Casino” beckoned us to the  former mining towns, now turned gambling havens, of Central City and Black Hawk.  Towers full of hotel rooms loomed over our heads. It was if we had discovered a mini Las Vegas deep in the mountains of Colorado.

I later found out that the road we had driven was referred to by the locals as Oh-my-Gawd Road. So named due grade and exposure. A drive down the road in the light of day revealed numerous steep drop offs along the narrow road.   When asked about the road, an elderly lady from Idaho Springs sneered to me, “They ruined that road! It used to be scary and only the locals knew how to drive it. Then they had to widen it and they ruined it!”

As I found out that summer night so long ago, roads in Colorado are not only scenic, but serve as lessons in history as well.

When I want to get off the beat and path and take a step back in time,  I still drive the Oh-my-Gawd Road as a way to remind myself of those who came to seek their fortunes so many years ago.