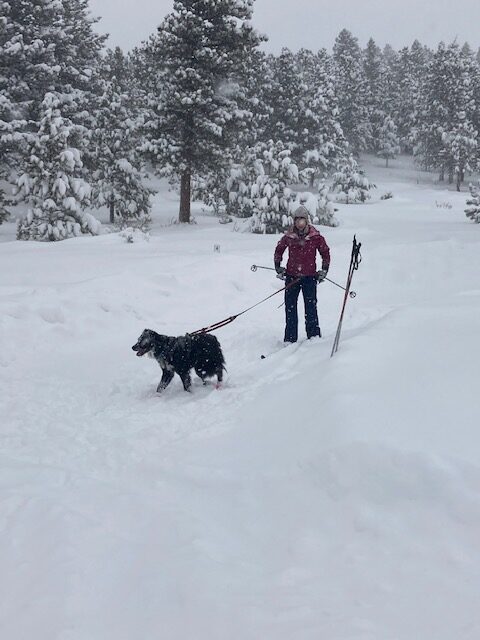 As Logan started galloping ahead of me, I couldn’t contain my glee. This was fun! And Logan finally found his wintertime sport.

Ever since we first got him as a puppy, we’ve referred to him as “tug dog.” Despite our best efforts to get him to walk properly on a leash, he insists on pulling. We tried a Gentle Leader, a kind of head harness, but he pulled so hard the harness dug into his snout.

Then we switched to the Freedom Harness by Two Hounds Design. It has the attachment loop on the front and buckles at the side. He definitely helped control him better with less stress on my shoulder, but didn’t stop him from tugging.

Dog trainers told us to stop him every time he pulled. I tried, I really did, but it was taking so darn long to get around the block, I just abandoned the technique. Logan is such a sweet-natured, gregarious pup with just this one deficiency. I made my peace that all dogs have flaws and this was his.

Well, today, I found the perfect sport where Logan’s tug tendencies work to his favor.

Skijoring is a winter sport where a person on skis is pulled by a horse or a dog. It comes from Norway and is literally translated as “ski driving.”

It’s probably easiest to to do with a dog, especially for beginners. If you’re going to try it, I highly suggest getting a proper harness for you and your dog, as well as a proper tow line. I ordered my set up from Howling Dog Alaska, which makes a lot of dog harnesses for dog sledding.

The people harness hooks around your waist and has webbing that you need to step through and then goes between and around your legs. All of it has clasps that allow you to tighten it to hug your waist. For your dog, you’ll want a sturdy harness with the loop on its back. And probably the most important piece is the tow line. Do not try to just use a static leash or rope or you will be in for wild ride.

The skijoring tow line has some give in it similar to a bungee cord, so that there is room for your dog to change speeds without giving you a huge jolt.

If you’re training your pups for skijoring, the commands are similar to riding a horse.  Gee means go right, haw means go left. Whoa means slow or stop. To get your dog going, you can either use the command of “Go!” or “Ready, hike!” which is what dog sledders use.

I’d never taken Logan skijoring and wasn’t sure how it would go. Would he stay focused ahead or would he veer off the side of the road?

Turns out he was a natural. And for our purposes it worked better when Bryon skied ahead of us, so he had someone to follow or keep his focus on. For me, it was great not to have to work so hard going up the hills.

But those downhills? What an exhilarating ride. Logan would start galloping as we headed down the hill and we just zipped along. Fortunately, for me, the powder snow slowed us down a bit and also meant there was no cars on the back road.

The other bonus of skijoring? Logan got a great workout and was completely mellow the rest of the day.

If you’re thinking of trying skijoring, try it on a dirt back road, like a forest service road with fresh snow. Make sure your dog is of a sturdy size, probably at least 45 pounds or more, and is high energy and likes pulling. It’s also good if they are not easily distracted, and probably helps if you have a companion for them to follow. Howling Dog Alaska sells both tow lines for one dog or two dogs, so if you have two high energy dogs, you can double the fun.

Last tip? Enjoy the ride and have fun!