Taking Down the Teepee 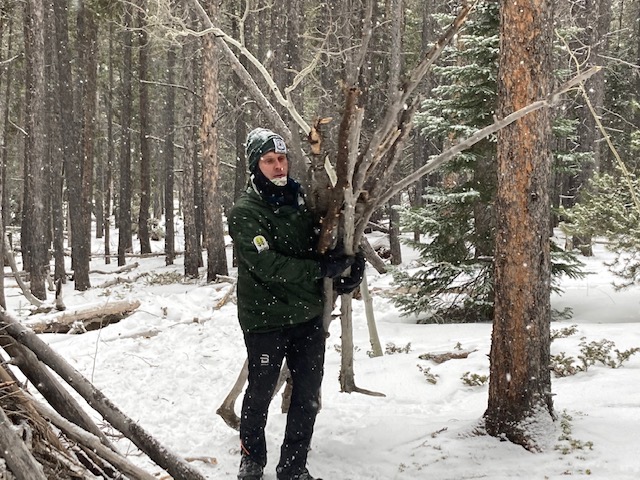 At first I thought it was a slash pile. A pile of branches stacked up teepee style in the woods. Slash piles are commonplace in the woods around Nederland. We had several on our own property.

Slash is what you have left over when  you cut down a tree. Most people cut the trunk into logs that can be used for firewood. But all the branches that adjoin the trunk? Slash.

It can be exhausting getting rid of slash. There are only so many ways to deal with it, and leaving it on your property is a major fire hazard. So often, in the wintertime, people will build piles of slash and then burn it when there is lots of snow on the ground.

Having worked for the both the Forest Service and the National Park Service, I knew both used this method to rid themselves of copious amount of downed wood.

When we first started snowshoeing up the Sourdough Trail on our patrol as Forest Service Volunteers, I wrote it off as slash. But then I took a closer look. Slash piles are usually built in open area, like meadows. It’s much safer to burn there than in a wooded area.

This “teepee” was in a heavily wooded area and had been built with a live tree in the middle. Inside I could see carefully placed rocks and an open area where it looked like someone had camped. I took a photo of it and consulted with my fellow Forest Service volunteers and employees.

“Looks like some sort of survivalist campsite — take it down!”

Leave No Trace means when you camp in the forest, you leave it looking like no one has been there. In addition, Forest Service rules require backcountry campsites to be at least 100 feet from a trail, or a lake.

Deconstructing a teepee is harder than you’d think.

Who’d ever put it together had done quite the job of interlocking large branches with smaller ones. We literally had to “de-engineer” it. Which poles were on the outside and could be pulled off first?

These “poles” were often more than 20 feet long and quite heavy.

If we just took the poles down and laid them on the ground at the base of the tree, we knew it would be easy for someone to put it back up again. So each pole had to be dispersed in the forest.

For four hours, we grabbed a pole, pulling and twisting to disembark it from the main structure, then hauled it down the trail. Or up the trail. Or across the trail.

I knew I wouldn’t need to do a workout that night — my shoulders ached.

Finally, we were down to just a few poles. The end was in sight. As I carried the pole out in the deep snow, and laid it gently down, I heaved a sigh.

The tree was free!

I gave it hug, with Bryon capturing it via photo. Not only had we eliminated a major fire hazard, we’d actually given the tree a much better chance of a long life.