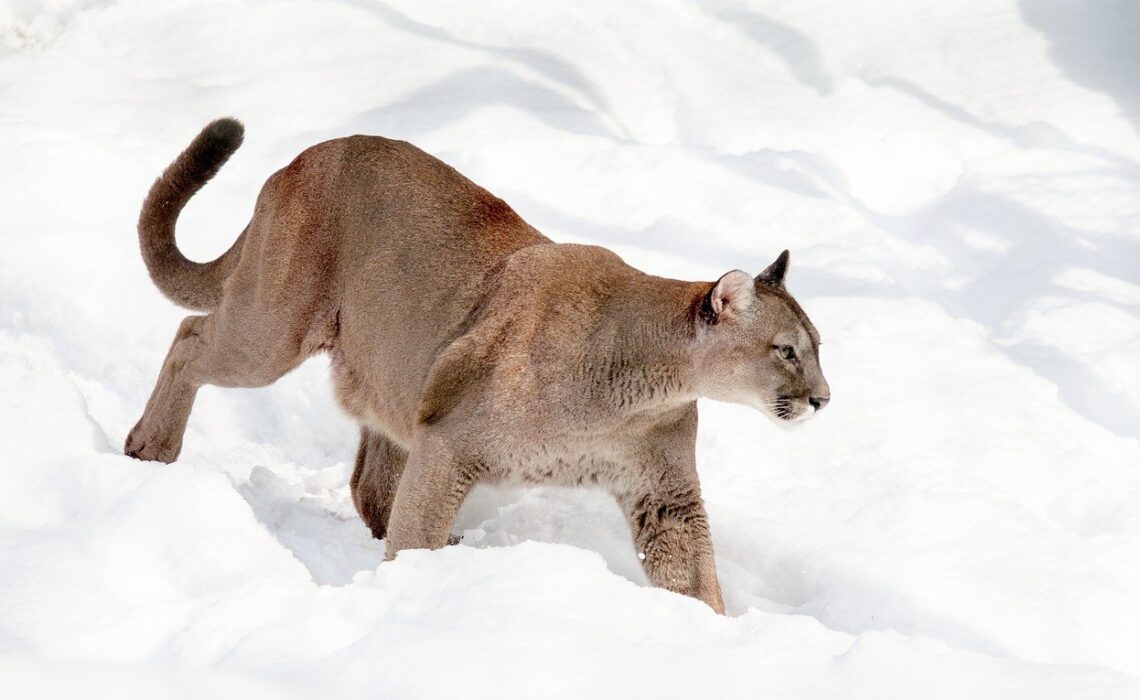 “So would it be ok if I went hiking at night on the trails near our house?” asked our friends, who also live in Nederland.

“We’d bring our headlamps. What could go wrong?”

“Well, there are mountain lions around here.”

“Really? How do you know that?”

“There have been several sightings reported on Nextdoor. Colorado Parks and Wildlife estimates there are around 3500-4000 in the state.”

Having mostly vacationed out here during summer, our friends were new to year-round living in the Colorado Rocky Mountains.

“Well, what do mountain lions eat?” she queried.

“They are carnivores, meat-eaters. They prefer elk and deer. A mountain lion can take down a 600-pound elk by snapping its neck. The thing is they mostly hunt at night — they have great vision and hearing and use the element of surprise.”

“Would you go hiking at night?” she asked.

“Probably not. Mountain lion attacks on people are fairly rare, but you’re taking more of a chance at night. The best thing is to hike with someone else during daytime.”

“Well, what do they do during the day then?” she followed up with another question.

“Sleep, take a nap on a branch of a tree — they are great climbers. Mountain lions aren’t altogether different from house cats. Sleep during the day, hunt at night.”

Mountain lions — king of the jungle. Or in the case king of the Rocky Mountains. No animal is more fearsome in terms of its hunting skills than the mountain lion.

As a Park Ranger at Rocky Mountain National Park, I used to do a program on mountain lions, and the two other wild cats seen in Colorado, the bobcat and lynx. I always got a good audience, as people seem fascinated by mountain lions.

As I researched my program, my admiration for cougars grew. For an animal that is about the size of an average adult male (165 pounds), they are incredibly athletic. Able to sprint up to 35 miles per hours, to leap vertically 18 feet high, and leap in a bound up to 30 feet. I used to joke to people, that if they were an Olympic athlete, they would win all the gold medals in track and field.

They have tremendous strength for their size as well, and can easily take down a full-grown elk. Combine that with vision that allows them to see well at night, and cupped ears that allow them to hear every little snap of a branch, and it’s easy to see why they are such incredible predators.

So, they sound pretty scary — should we be worried about being attacked by these fearsome creatures?

Something I read in a book stayed with me: “For every one mountain lion we see, one hundred have seen us.”

Initially, that sounds creepy and scary. But when you think about it, they have many opportunities to attack, but rarely do. In fact, your chances of getting struck by lightning are much greater than getting attacked by a mountain lion. In Rocky Mountain National Park’s history, there has been only one fatal mountain lion attack. A little boy who’d gotten ahead of his family was attacked on the west side of the park back in 1997.

Most attacks on record are of solo hikers or runners. Think safety in numbers. By hiking with other people during daylight hours, you will greatly minimize your risk.

And if you ever do get the chance to see one from a safe place (like inside your car), treasure the moment and consider yourself lucky. They really are amazing creatures that command our respect and admiration.