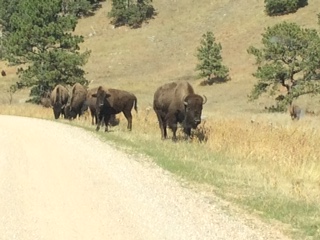 As we rounded the turn, the dogs began to bark. My heart began to race.

In the middle of the road stood an enormous bison.

I guess I shouldn’t have been surprised, as the Dakotas are known for herds of bison. Still, with it standing just a few feet in front of our car, I really grasped the size of this creature.

Woman Who Runs from Buffalo.

As I reflect on my mother’s recent death, I reflected on that trip to the Dakotas two years ago. And my mind once again turns to Native American culture and history. Though my mother was Caucasion, she had a great fascination American Indian history. For years, she volunteered with the National Park Service’s Museum of Westward Expansion, the museum underneath the the St. Louis Arch. Much of it interpreted early American history and the conflict between westward expansion and the native people.

Fast forward to last Christmas. I did not know what to get them for Christmas. At their age, one more sweater or scarf is one more thing they don’t need.

So I asked my mom, “What do you want for Christmas?”

Her answer surprised me.

“What would mean more than anything to me, would be for you to donate money to the American Indian College Fund. I want to help young Native Americans go to college.”

After her sudden death two weeks ago, friends and family asked me, “What charity can we donate to?”

And I had the answer.

Like my mother, I’ve been fascinated with Native American history, and more specifically spirituality since the time I first started working with the National Park Service, 23 years ago. Dig deep underneath any national park’s history and you will discover the rich history of the first people to inhabit the land.

During that journey, I learned much about their outlook on life.

That they believe no person could ever own the land, that we co-exist with all other living things. When they hunted, they tried to use every piece of the animal, leaving nothing to waste. That only by doing so, would they honor their life in the greatest way possible.

That our journey on this earth leads to the place where we spiritually fit. So that even as they faced droughts and other tragedies, they felt they were being led to their destiny.

To their Center Place.

A trip through the Dakotas or even the plains of Eastern Colorado harken life 200 years ago, before European settlers came. As I survey the wide open spaces, vistas, and the horizon over a hundred miles away, I imagine this is what it looked like to the Ute Indians.

I can imagine what life must have been like when these areas were covered with wild bison, deer and elk. Only the Native Americans resided here, living off the land and hunting the bison.

One of the high points of our trip to the Dakotas was spending the day at Custer State Park, where as we drove one of the dirt roads, encountering literally hundreds of bison.  Bison on either side of the road, bison on the road, bison next to our car, big bison, little bison (calves).

For some reason, seeing so many of them brought to mind the word Tatanka, the Indian word for bison.  One of the things I loved about the movie, Dances with Wolves, was the names of the Indians, like Kicking Bird.

It made me wonder, what if we gave names to each other in the same way, what would my American Indian name be?  And what would be the names of my friends and families?

How did Native American get their Indian name? Depending on the tribe, it could have to do with where they were born, special deeds, and spirit names. Often times, names could change over time depending on their life experiences.

I am such a lover of animals, both wild and domestic, I think my Indian name would have to incorporate my love of animals like “Woman Who Walks With Dogs” or something like that.

As I think of my mom’s last wishes, I wonder what her Indian name would be? She love gardening and tending plants, and she loved helping young people to become more educated.

What would yours be?