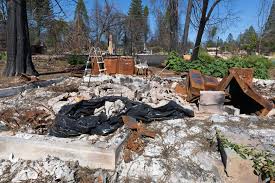 We lost our home and most of our things in the Cold Springs Fire.

Thankfully, we were in Florida at the time, safe with our dog and three cats. By the time we got to Nederland, kind people had cleared our homesite of debris. The left the few remains they found on the hood of the burnt out husk of my Blazer. Just three or four coffee cups. One was my father’s, and it meant a lot to find it intact – singed, but solid.

Not so much the fire itself — that came and went. It’s “after the fire” that’s so hard. Trying to rebuild in a county with lots of building code requirements, where the contractor work ethic is lacking, and opportunists abound. The cost to rebuild was beyond shocking, so much so that we gave up. Instead, we went searching for an existing house, and were lucky to find a lovely home on the other side of Ned.

That was four years ago.  Now, many of us have friends and neighbors who lost their homes and their things in the recent fires. What can you do to make things a little easier on them?

Give these people time to search, to gather, to grieve, to accept, to move on. It’s all so overwhelming. The last thing they need is traffic, blocked roads and driveways, and sightseers getting in the way.

Imagine being on your hands and knees, digging through ash, hoping to find some of those little things that were so important. Only to be interrupted by a stranger who, without bothering to say hi, says “I heard there was a stove here.” Or “I knew the people who used to live here.”

Imagine finding someone who can tear out your damaged foundation before winter (and who actually shows up to do it). Only to have fire tourists park right on top of it so they can go looking around?

Imagine yourselves holed up in an adequate but temporary and impersonal rental on the first anniversary of the fire. Out of the blue, you get a call that there is a tour bus parked at your burnt property and dozens of people are milling about?

Trust us, the burn scar isn’t going anywhere, you’ll have years to get a good look. Give these people their space. If they need your help, they’ll ask for it.

We did, and boy did we get some help! Looking back, it’s all a blur and we don’t even know all their names. This is not an exhaustive list, but we would have given up if not for their generosity of spirit.

Many thanks to Danny Martin, Liz and David and Will Ford, Charlie and Bretlyn Schmidttman, Rick Dirr, Robin and Alice and Savannah Ames, Leslie Brodhead, Terry at East Street Garage, Green Haired Dave at the Transfer Station, Team Rubicon, and even the Southern Baptists.

Thank you all, we love you.