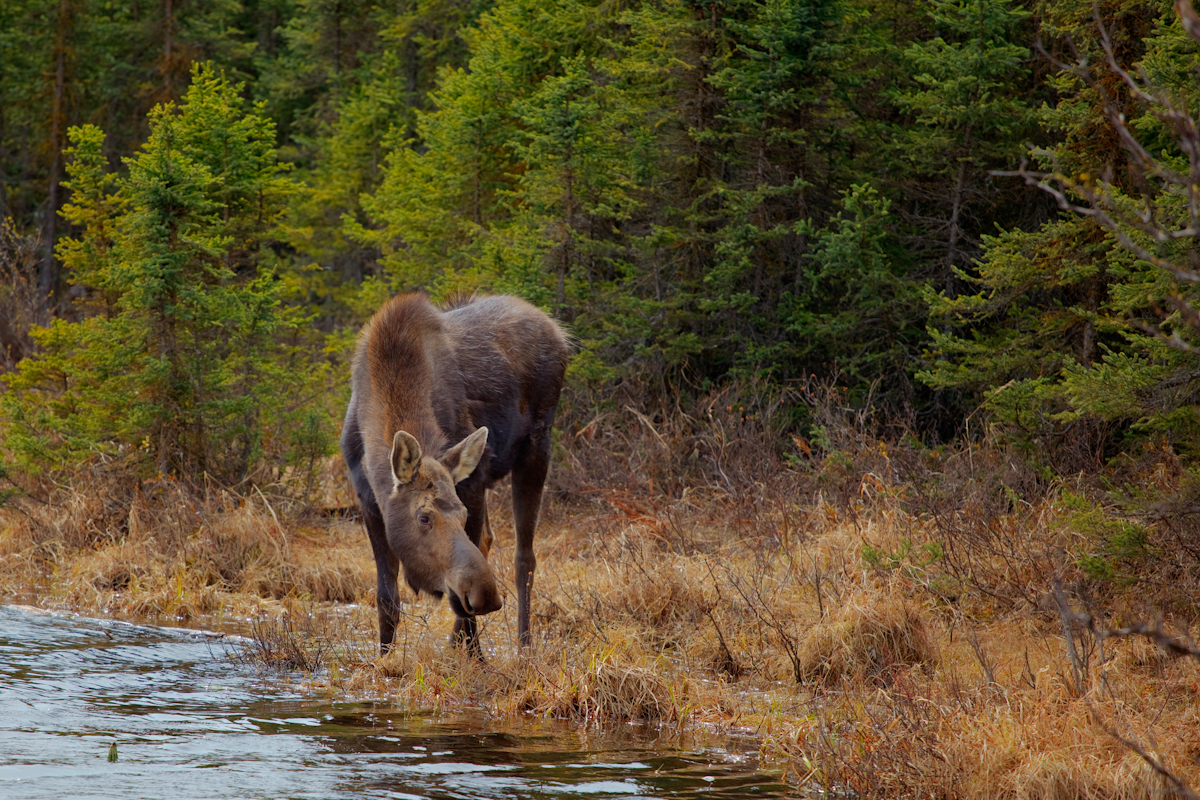 For much of my life I lived in the suburbs and commuted to work on packed freeways. Like many others, I spent much of my time stuck in the proverbial traffic jam.  Cars would inch along at a snail’s pace, and it would take me an hour to go 10 or 12 miles.

I never had much patience for sitting in a traffic jam along the highways and city streets.  I’ve often thought I’d rather drive way out of my way on a country road, but be moving along, than sit in traffic.

But life in the mountains brings an entirely different sort of traffic jam.  It doesn’t have anything to do with tons of people trying to get to work, but rather what they see along the way.  This past weekend while out viewing leaves, I saw a most interesting kind of “jam” while driving the Peak to Peak Highway near Nederland. I noticed four or five cars stopped and people standing next to the road. They were intently looking at something.  Instantly I knew what that “something” must be.

I’ve seen the same thing repeated with Rocky Mountain Elk who are rutting right now. All of the sudden, people are parked in the middle of the road, almost blocking the entire road. Staring into the woods, smart phones out.

It’s easy to understand why people get so excited. Elk and moose are the among the largest of the wildlife that populate the Rocky Mountains. And wildlife remains us of the wilderness that borders our small mountain town. It’s what makes it so special to live here.

This year especially has brought more traffic and more elk and moose jams than previous years. Colorado has been experiencing a surge of tourism courtesy of the coronavirus pandemic. People who have been feeling pent up from other states long for adventure and Colorado provide a worth road trip destination. If you’re from St. Louis of Dallas, seeing a moose is unlike anything you’d see near your home.

Since it was a gorgeous blue-sky day filled with sunshine, lots of people were around to see the last of the fall foliage.  The Peak to Peak Highway is a very popular scenic route for many tourists.  An easy day trip from Boulder, it offers scenery and wildlife.

At one point, there were as many as fifty people or more standing alongside the road gazing upon this mother moose with her calf.  The moose were incredibly tolerant of this adoring crowd, going about their business with an occasional look up. Sometimes, putting on a show of prancing through the water, running alongside the willows, but never charging the people.

Moose have few predators (the wolf being their only true predator) and they are very tolerant of people as long as they don’t get too close.  That may soon change depending on the election (see post later this week). The biggest issues with people and moose come not from the humans themselves, but frequently their canine companions.  Moose see dogs as being similar to wolves and perceive them as a threat and will charge the dogs and the humans with them.

Within minutes of the moose disappearing, so too did the cars and moose jam dissipate.  But the memory of watching this magic moment of wildlife reminded me of why it’s so special to live here.  And judging from the crowd it attracted and the comments I heard from visitors, it certainly brought a lot of joy to others as well.