The Wonder of Wildlife 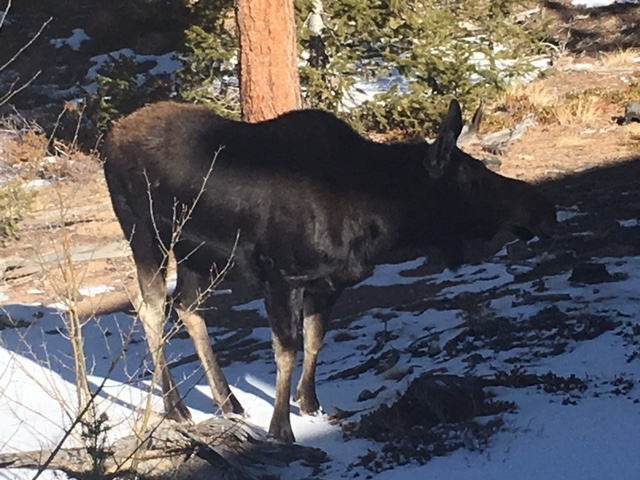 My first clue was Shawnee’s ears perking up. As she stared intently in the woods, I knew there was something out there.

“What do you see Shawnee?”

Then a blue of brown with a creamy white butt appeared between the trees.

During a time when nothing feels normal, nature continues on. And with so many days filled with stress and anxiety, the wonder of wildlife reminds not everything is wrong in the world.

I peer down the hill, and count at least a dozen Rocky Mountain elk. Unlike us humans, they are crowded together — no social distancing among the animal kingdom! Mothers hover next to their nearly year-old calves. They stand stock still as if to blend in the dry brown grasses and trees.

As a former Park Ranger, I know many of the females will be eating for two right now. They usually give birth to their calves in April and May. It’s no wonder, that I have spotted them off The Summer Road or Hurricane Hill. The southern exposure means the snow has melted providing shrubs and young aspen for them to browse on.

As we continue on our walk, Bryon suddenly stops, squinting over towards a snow bank next to a house.

“Do you see that dark blob on that snowbank? Is that a moose?”

From afar, it was hard to tell. Then I suddenly saw its head move.

Moose and dogs don’t get along well, as moose perceive dogs as wolves. Predators that could threaten them. The few incidents that have occurred where people have been injured usually involve dogs. A few years ago, two women in Gilpin County encountered moose and the women got stomped by a moose.

As we scurry up the road, I stop dead in my tracks. Apparently, that moose on the snowbank was not alone. A very large moose stood by the side of the road, not ten feet away from us.

Logan began frantically barking and leaping on his leash. I veered into the woods on the other side of the road with Bryon right behind me.

Moose can run quite fast in open spaces, so it’s best not to run. But they large bodies on stick-like legs make it difficult to navigate in wooded areas, so it’s the best option.

Somehow seeing the elk and the moose made me feel more grateful during this very stressful time. While the man-made world has been turned upside down, nature was still doing its thing.

It felt comforting to see wilderness in all its glory alive and well.

After all, isn’t that part of the magic of living here?