A Mouse…Not in the House? 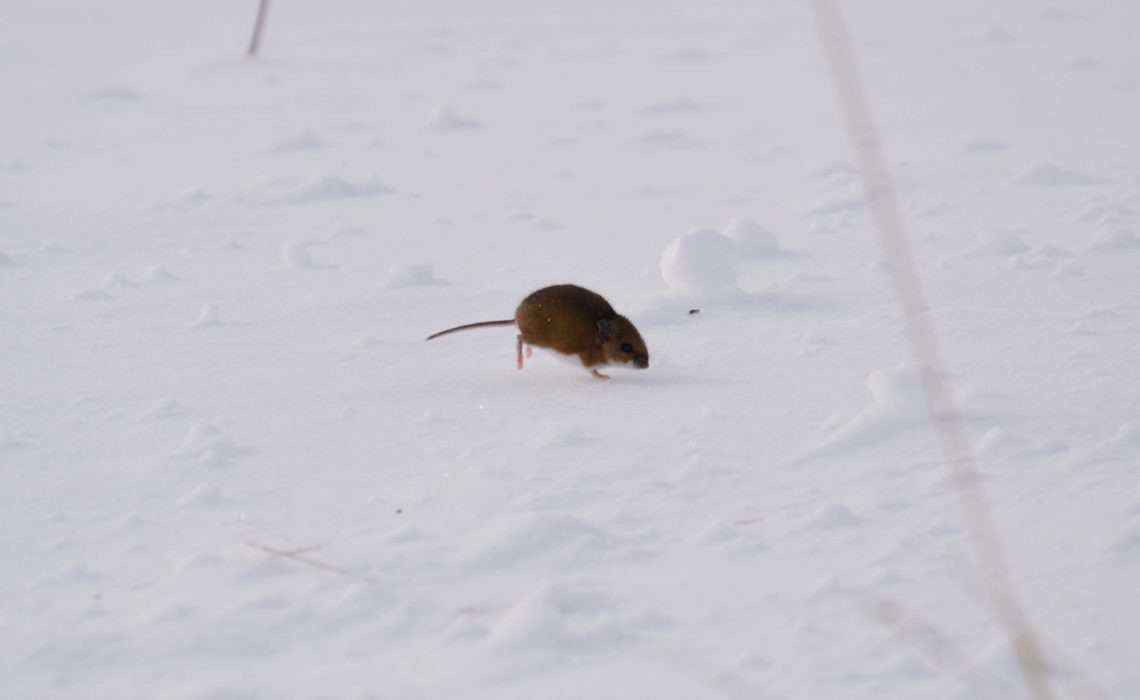 Lots of coffee helps, as it did one recent morning as I navigated the dark, snowy roads of our neighborhood.  As the headlights lit the road in front of me, something scurried across.  Something very small — a mouse!

With temperatures in the single digits, it’s hard to believe anything is moving around in the bitter cold and snow.  But sure enough, the little mouse ran across the top of the snow, a blur of activity.

Did you know that mice are the most common mammal in North America?  Everyone has seen a mouse at some point in their lifetime, whether it be inside your house or out.

The most common mice in Colorado are Deer Mice.  And they don’t hibernate in winter.  So unless they find a nice cozy house to sneak into a make a nest, they’ve got to get creative to survive.

Mice will make nests out of assorted materials — twigs, leaves, fur — even feathers.  They use these assorted items to build cup-shaped nests, where they can burrow. Even during winter, they will continue to use these nests.  Between the snow and the ground is a space of several inches that is created because the ground is warmer than the snow.  If you hike in late spring, you’ll frequently see this as the ground gets warmer and the snow thaws.

Mice and other small rodents will use the space to live in during winter. Since they don’t hibernate, they have to continue to forage for food, eating both live critters and vegetation. Invertebrates and insects are the favored live food, augmenting that with nuts, fruits and fungi like mushrooms.

My sighting of the small mouse under the cover of darkness wasn’t unusual. Like many mammals, mice are primarily nocturnal. This is an adaptation for survival, as the deer mouse is a favored prey for many other mammals living in the Colorado Rocky Mountains.  Wild cats like bobcats, as well as coyotes and foxes will eagerly devour mice.

Because of this, their life span in the wild is short-lived, with many succumbing in less than a year.  But they are quite busy reproducing during that time, delivering up to eleven litters.  Each litter could have as many as nine baby mice.  That’s almost 100 mice!  No wonder, they are so common!

If you do find mice in your mountain home, beware.  Mice can carry hantavirus.  Hantavirus is found in both their urine and droppings.  The dust can infect a person’s respiratory system, creating a serious illness.  The best thing to do is to thoroughly saturate the droppings with a spray bottle, and then sweep and remove it from your house.

The next best thing to do is buy a cat, or two.  Our brown tabby, Simba, is quite the hunter. Since we adopted him, we haven’t seen a single mouse in our house.