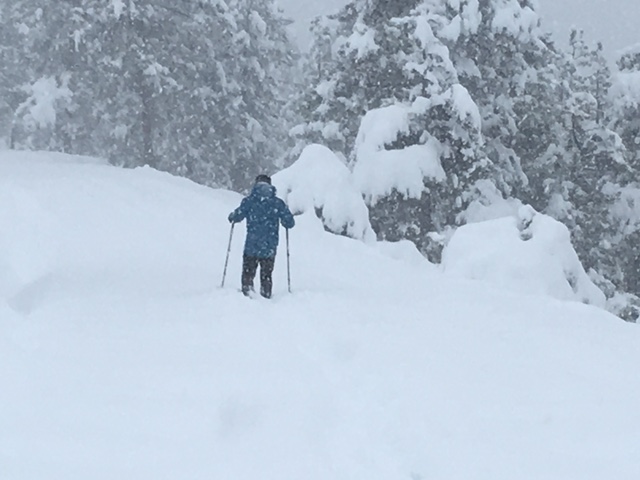 “Let’s go to the Winter Park side!” I yelled.

The wind blew so hard, I could hardly, it pushed me backwards on the gentle slope.  I pushed my poles into the snow, trying to propel myself forward.  Pellets of snow blew into my face. I tried to push my neck gaitor up over my chin, but it had actually frozen solid.

As we continued down the slope, my face felt like someone was sandpapering my face with ice pellets.  I tried to find a place to stop near the trees, hoping it would provide some shelter.  I scanned the slope for Bryon, but could hardly see through the blowing snow.  Finally, I spotted him down by the lift.  Skiing in such low visibility gave me a sense of vertigo.  I knew I was moving, but with nothing to gauge my progress by, it felt like skiing in place.

As we pulled up to the blue stripe to get on the chair, the lift operator said: “I would recommend that you two sit on either side of the chair to balance it out.”

I knew what that mean.  It was going to be a rough ride.  As we neared the top of the hill, the chair started to rock side to side.  The wind blew straight into us as we stood up.  I tucked down hoping I didn’t get smacked on the back side by the chair.

Mother Nature giveth in the form of over a foot of snow, but she taketh away with howling winds.

The only day I could remember that was worse than this was five years ago — my first season working at Winter Park.  In addition to teaching skiing, I used to survey guests while riding the chairlifts, or at the lodges on the mountain.  I stopped at the Sunspot, the mid-mountain lodge on the Winter Park side.  I spent about a half-hour talking with some people and getting a bite.

When I went back outside, I thought the apocalypse had happened.

There wasn’t a single person on the snow — not a skier, not a snowboarder, not an employee.  It was eery.

I looked over at the two chairlifts nearby — neither one was running.  Good God, what had happened?

When I skied down the hill, the wind blew up the hill so hard, that I basically came to a stop.  Even on a blue slope, I had difficulty keeping my skis moving.  Still, I saw no one.  About a halfway down, I finally saw a ski patroller driving a snowmobile — he briefly checked on me to make sure I was ok.

Finally, I got onto a more sheltered trail and made it down to the village.  People were walking towards the parking lot. Everyone was gone.  I checked in with my boss to see what was going on.

“All the lifts have shut down to winds, except the Gemini and the Arrow.  None of the Mary Jane lifts are even running.”

Snow is a blessing to ski resorts, but wind is not.  Sometimes, you have to put up with one, to get the other.