A Stink Bug in the Bed 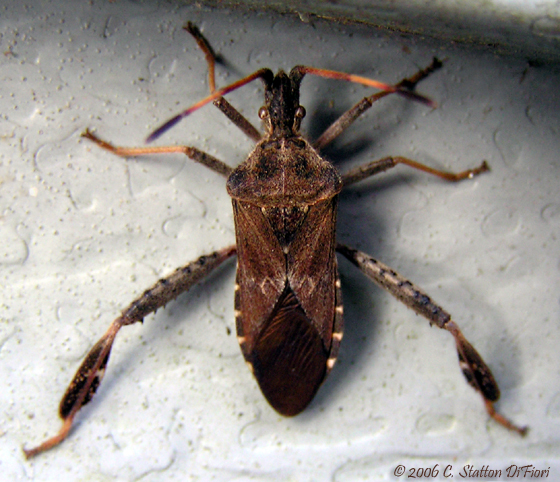 Ever had that feeling while asleep  at night and you can’t figure out what’s a dream and what’s real?

I spent last week in bed sick with the flu.  For some reason, as I have recovered, I’ve been having very vivid dreams.  Dreams that felt so real, I literally felt what was happening.

Or so I thought.

Though I worked as a Park Ranger, I still have my phobias of creepy, crawly things.  I’m not a huge fan of snakes, and I don’t particularly love spiders or other types of bugs.

During my dream, I found myself in a deep, dark tunnel.  I could smell the earth around me.  That damp smell of dirt, like when you are planting your garden.

I kept looking for the end of the tunnel, but couldn’t find it.

Then I felt something on my arm, in the nook of my elbow.  The itching drove me crazy, and I slapped at it.

A strange, pungent smell filled my nostrils.  It’s as if someone threw pine needles in a blender.

The black bug with the oblong body was on my arm.  I shrieked, waking Bryon up, as I hurled it towards the wall.

There’s nothing worse than a stink bug in your bed.

The stink bug numbers seemed to have surged inside our house this winter. By stink bugs, of course, I mean Western Conifer Seed bugs.  During the warmer months, the seed bugs spend their time outside, feeding on the sap of pine and fir cones. They particularly like Lodgepole pines and Douglas-firs, so it’s no surprise we find a lot of around our home in Nederland.  Being on a north-facing slope, those two species of trees make up the bulk of forest around us.

But once the weather turns cold, they look for little nooks and crevices to spend the winter in.  This winter has been steadily cold, without the typical January thaw.  And the stink bugs have wedged their way into the spots between the logs that make up our home.

And they are everywhere.

I go to take a shower in the morning, and surprise!  There’s a stink bug in the bottom of the tub.  I find them on the window sills a lot, as well as just crawling up the walls.

Once our cat decided to hunt one down, swiping it off the wall with her paw and popping it in her mouth. That disgusting foul smell they emit cured her of ever going after another stink bug.

After ten Nederland winters, I’ve mostly learned to co-exist with them. But a stink bug in my bed?

That is simply too much for me.