Life with an Outhouse 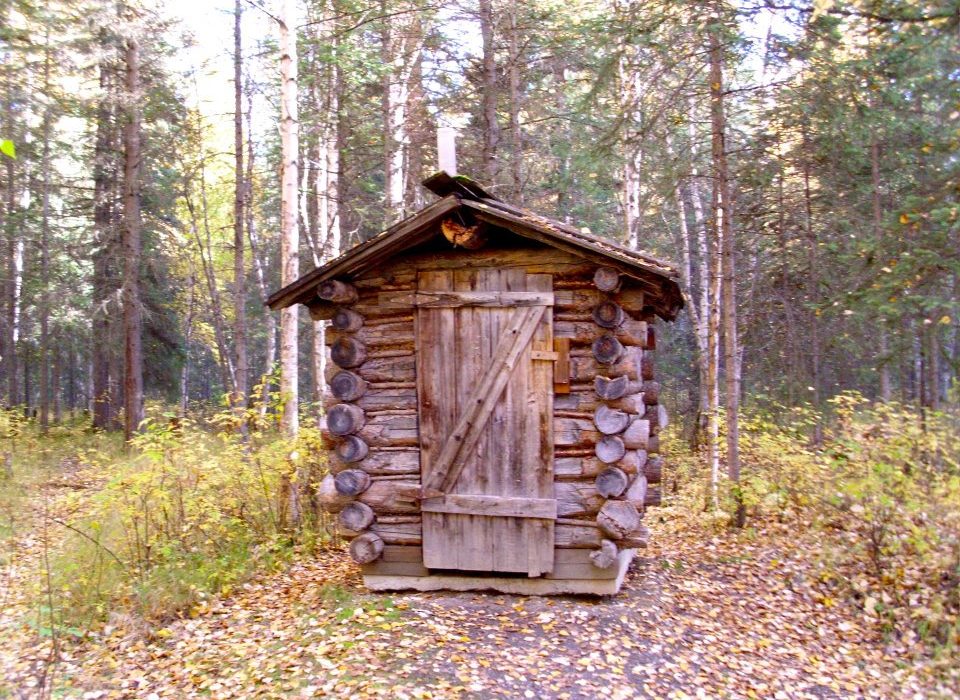 Years ago, my grandfather got a new girlfriend, Libby.  He lived in a small, rural town in northeastern Pennsylvania.

Libby seemed old-fashioned with silver gray hair curled at her shoulder and thick glasses.  Like many in that small town, she lived there all her life.  But what I remember most was a conversation about her home along the Delaware River.

“So where do you live, Libby?”

“I have a small home with a bedroom and a kitchen.”

“No, I just have an outhouse.”

Say what?  Up until then, my experience with outhouses was limited.  Reading about them in “Little House on the Prairie” books as a child.  And using them while hiking in the mountains.

I conjured up an image of a filthy and foul-smelling small building with a pit toilet.  While hiking in Sequoia National Park up to Pear Lake, I encountered the worst out house ever.

When I opened the door, the smell knocked me off my feet.  But what I saw surpassed what I smelled.  It looked like someone’s butt had exploded all over the toilet seat.  At that point, I dashed out the door and ran for the nearest tree.

When Libby told me she used one every day for her “daily” business, it seemed completely crazy.  In the 21st century, people actually did this?

However, on our recent trip to Alaska, I learned outhouses are not quite as outdated as I thought.  And my opinion about outhouses and the people who use them completely changed.

In between visits to national parks, we had the chance to visit with an old friend of Bryon’s who lives in Fairbanks.

If you’ve never been to Fairbanks, it is way far north, and way cold.  When you look at a map of Alaska, Fairbanks and Anchorage don’t look so far apart.  But that’s only because the rest of the state is so large, that the distances shrink in comparison.

In reality, it takes an solid 8-hour day of driving to get from Anchorage to Fairbanks, and their climates are quite different.

Anchorage sits on the Cook Inlet, with a maritime climate.  It’s still cold, but not that different from many cities in the lower 48.

Fairbanks resides deep into Alaska’s interior.  And it gets but cold, with and average daily temperature in January of -8 and average lows of -17 degrees.  The high temperature gets to a balmy 1 degree above Fahrenheit.

Because of the cold, much of the land is permafrost, ground that stays completely frozen year-round.

“Our cabin is built on permafrost.  That’s why we don’t have an indoor plumbing.” Denise said to Bryon and me during lunch.

In my mind, I wasn’t sure what that meant in terms of plumbing.  I later found out, that houses on permafrost have to be built on blocks, and that it’s almost impossible to put in plumbing.

“Ok, I can see that in summer when the weather is nice.  After all, even where we live, we go to the bathroom outside behind our house.  But what about winter?  Isn’t it freezing cold?”

“Oh, it’s not so bad.  We have a styrafoam seat, which makes it a lot more comfortable to sit on, because it’s not freezing cold.”

“Where do you take showers?” I queried.

“Oh, we have showers at work, so we just us those.”

She sounded so cheery about it.  In that moment, I realized my image of an outhouse completely differed from this.  This was her personal outhouse, a place that she kept neat and clean.  Not like the filthy places I’d encountered on the trail.

These Alaskans sure are hearty folk.  A “can-do” attitude if I’d ever heard one.

It was hard for me to reconcile in my brain.  She was married with two children, and obviously highly intellectual. In my mind, I had thought of people who lived with outhouses as redneck types like in the movie, Deliverance.

Our conversation sparked curiosity about the subject.  After lunch, as Bryon drove, I surfed my smart phone.  Turns out, living in a “dry cabin” with an outhouse is way more common in Alaska than I knew.

It also turned out that people found innovative solutions to the issue of no indoor plumbing.  Not everyone was as hearty as Denise.

I learned all about “honey buckets.”  Honey buckets are buckets set up below an indoor commode.  They are lined with a garbage bag, providing a portable toilet in the heated environs of your cabin. As one can imagine, the buckets start to stink pretty quickly and must be emptied into the outhouse.  One couple posted a photo of “his and hers” honey buckets, side by side.

The notion of a honey bucket seemed better than traipsing outside, but I still had my doubts about this lifestyle choice.

Could I survive in the wilds of Alaska with this lifestyle?  Maybe if I knew nothing else.

One of the more amusing tales she told during lunch was about when her kids were little.  They would got to visit family back east on Long Island, and the kids would try to go to the bathroom outside.  I giggled thinking of the scene.

“Jason, it’s not okay to pee on the bush in Grandma’s yard.  Go inside and use the bathroom.”

But for me, I had known something else, the wonders of a warm bathroom with a flushing toilet.  As much as I’d like to say, I’m tough, I’m not that tough.  Faced with braving sub-zero temperatures, having to put on boots and a hat and coat, just to do my “business”, I’d choose somewhere else to live.

Alaska really is the last frontier, even when it comes to toilets.