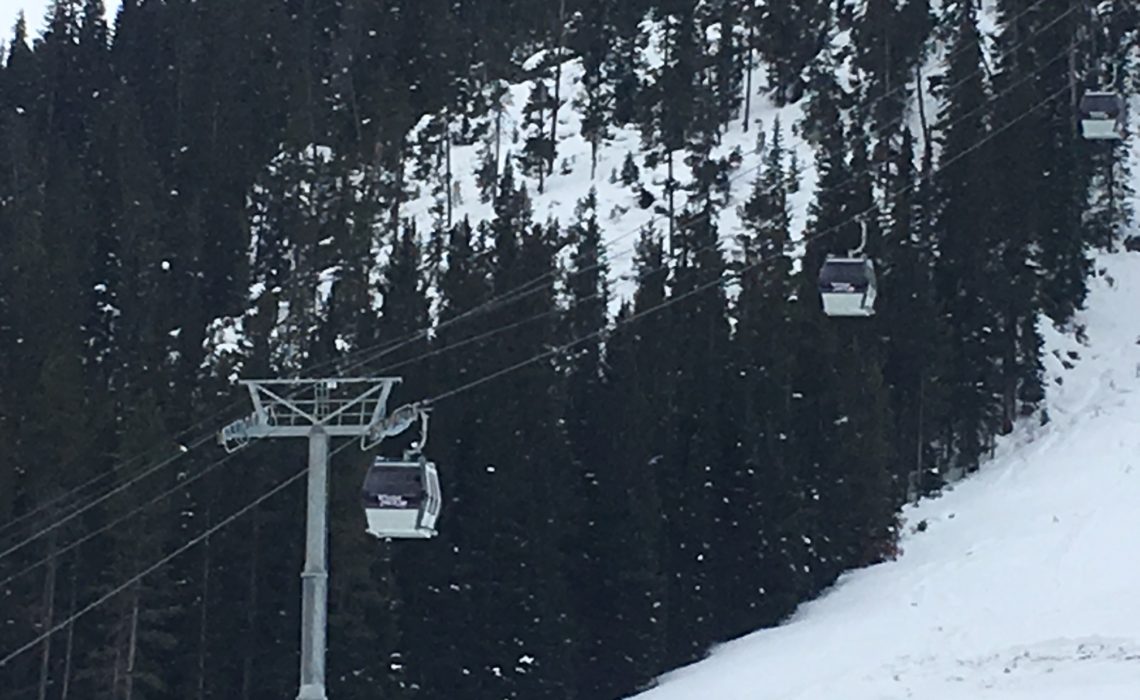 I saw it come to life over a matter of weeks.  First, I walked through the village and I saw the towers perched on the hillside.  Later, cable first lay across the bricks, then got strung  — one tower to the next.  A huge crane loomed over the Sun Spot during those first days of the ski season.

Gondola cars sporting the black and red logo — Winter Park — stood one next to the other, like toys stacked under a Christmas tree.  Then finally, they were hanging from the cables and moving, actually moving.  Still, the Gondola wasn’t ready for prime time.

It had to undergo testing — load testing, safety testing.  Day upon day, the news on Facebook said that more testing had to be done.  I wondered if I would ever get to ride in its shiny new cars.

Yesterday, I was scheduled to teach skiing.  Lo and behold, the Gondola had finally been cleared to take happy skiers up the mountain.  I so wanted to ride it during its first full day of operation.

“So what would make this the most fun ski day ever for you guys?” I asked my group of exuberant 7, 8 and 9 year olds.  It’s my way of trying to find out their goals of our ski lesson in a friendly way.

“I want to ski the terrain park!”

It’s my job as the Ski Instructor of my Level 5 group to see if I can teach them some skills while still incorporating these things into our day.  But I also hoped I could do the one thing that would make my day.

So what’s the big deal anyway?  I’d heard so much about it.  They said it was state of the art.  One of the fastest ski lifts in the world.  Can carry 10 people in one single car.  Supposedly, the reason it took so long to get operating was because the gondola cars and other parts came from Europe and had to be shipped over here.

My plan almost got derailed.  I managed to get in a run in the terrain park, ski through some bumps and get to lunch.

“Hey, how about we take the Gondola after lunch?  What do you think?”

Among the cheers and excitement, one small voice dissented.

“I have to take my skis off and carry them on — it’s too scary and too much work.  I don’t want to.”

Major bummer.  What could I do?  I’ve always believed in teaching ski school that we need group consensus for things.

“What if I carried your skis for you?”

So there I was Friday afternoon, herding seven kids into a gondola car and juggling carrying two pairs of skis and my poles.  I just managed to be the last person in before the doors closed.

It was totally worth it.  The quiet — the views of the snow capped peaks, the chance to hang out with my whole class on one lift.  The kids laughing, pointing out things in the car, on the slopes.  As billed, it was lightning fast, zipping along in its eerily silent ascent up the mountain.

Thanks to all those hard working engineers, construction workers, and lift maintenance staff for the memory of riding Winter Park’s newest lift.