The “Other” Meteor Showers 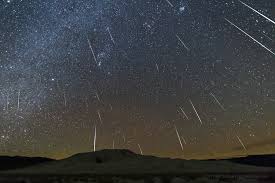 When thinking about our move to Nederland, I often reflect on the remoteness, the beauty, the wildlife, the quiet.  But something I appreciate each night when I take the dogs out for their last potty break, is what I see in the sky.  Despite being a mere 15 miles west of Boulder, Nederland offers the chance to enjoy the night skies.  The stars glow brightly overhead on the night of new moon.  I can actually see the Milky Way galaxy, looking like confetti thrown across the sky.  And meteor showers offer a chance to spy flashes of light whizzing overhead.

The Perseids Meteor Showers get all the glory.  It’s all about timing.  Mid August brings balmy nights and vacation time.  The perfect opportunity to hang out on a mountain, a rock, or even your deck to watch shooting stars go zooming by.

But in reality, there is more than one meteor shower during the course of the calendar year.  If you’re a true afficionado of watching this night sky spectacle, you might want to bundle up and spend some time outside in winter during the wee hours.

According to www.space.com, the Geminids are slower and frequently brighter, allowing us to catch sight of many more meteors than other meteor showers.  At their peak last night, you could see 60 to 120 meteors per hour.  A night later, there are about 25% of peak, so still worth taking a peak during a middle of the night bathroom trip.

But maybe you’re reading this tomorrow morning, and thinking, darn, I missed my chance.  Never fear, another meteor showers takes place right after the New Year, the Quadrantids, just 19 days from now.  It only peaks for a few hours the night of January 3 to the morning of January 4.  With a new moon on January 5, if we get lucky enough to have clear skies, they should offer a great show.

So bundle up, bring a thermos of hot cocoa and enjoy the beauty of outer space on a cold winter’s night.