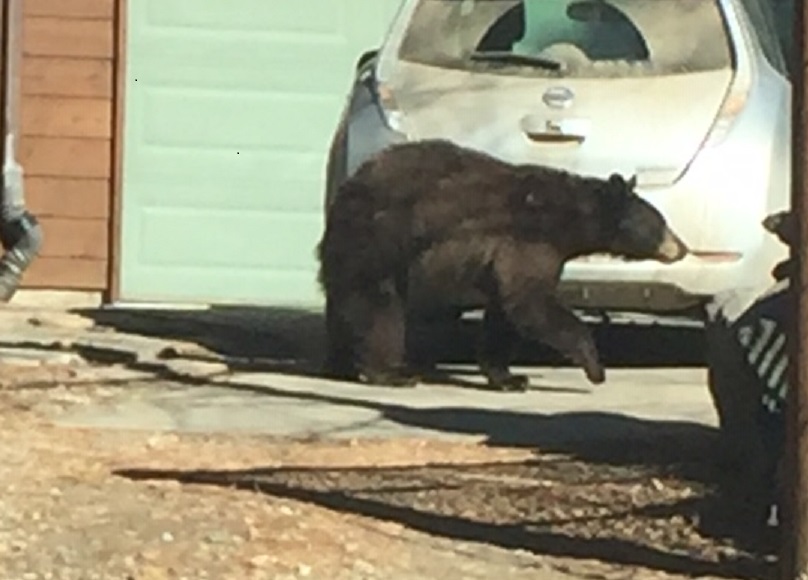 Sitting at the table eating Sunday breakfast, Bryon and I lazily read the newspaper.  Since I was a kid, Sunday breakfast has always been a tradition with my family, so it only made sense that we continued it.  Waffles, pancakes, omelettes, hash browns, and bacon on a cold Sunday morning hit the spot.

As I glanced up, I caught sight of something moving near the garage.  My first thought was moose, because they have become so common around our neighborhood.  But this thing was lower to the ground.  As it moved again across the snow, I realized it was a bear — a very large bear with a brown coat.

“What, did something happen?”

As I ran to get my iPhone from the bedroom, the bear dashed off into the woods.  Not to be deterred, we got into the car, cruising the neighborhood in hopes of seeing him again.  Amazingly, we did find him — in the driveway of our neighbor’s house, digging around the propane tank.  Every now and then, his head would pop up and it felt like he looked us right in the eye.  Finally, he amble off again into the woods behind the house.

Now, at this point, I can only imagine what a little kid would say to me upon hearing this story.

That’s what we’ve all been told since the time our parents started reading us “Goldilocks and the Three Bears.”  Bears hibernate, go to sleep, and don’t awaken again until late spring.

What is hibernation?  An animal that truly hibernates will lower its body temperature, slow its breathing, and slow its metabolism down to the point where it can’t be roused.  This is what allows it to survive for months on end without eating.

A great example of an animal commonly seen in the Colorado Rocky Mountains that does hibernate is the Yellow-bellied Marmot.  Marmots tend to go into hibernation in October and won’t be seen again until May.

But Black Bears like the one I saw don’t go into that almost comatose state.  Because they are simply sleeping or denning, they can get up in the middle of winter, and take a stroll around in search of food, just like the bear we saw in our back yard.  They’ll try to find things to eat, fill themselves up with whatever food they can find, and go back to their den for a nice, long sleep.

For this reason, us humans who live in bear habitat need to continue to be vigilant about keeping human food or trash away from bears even in the winter months.

Or you might just get an unwanted visitor knocking your garbage can over in the dead of the night.