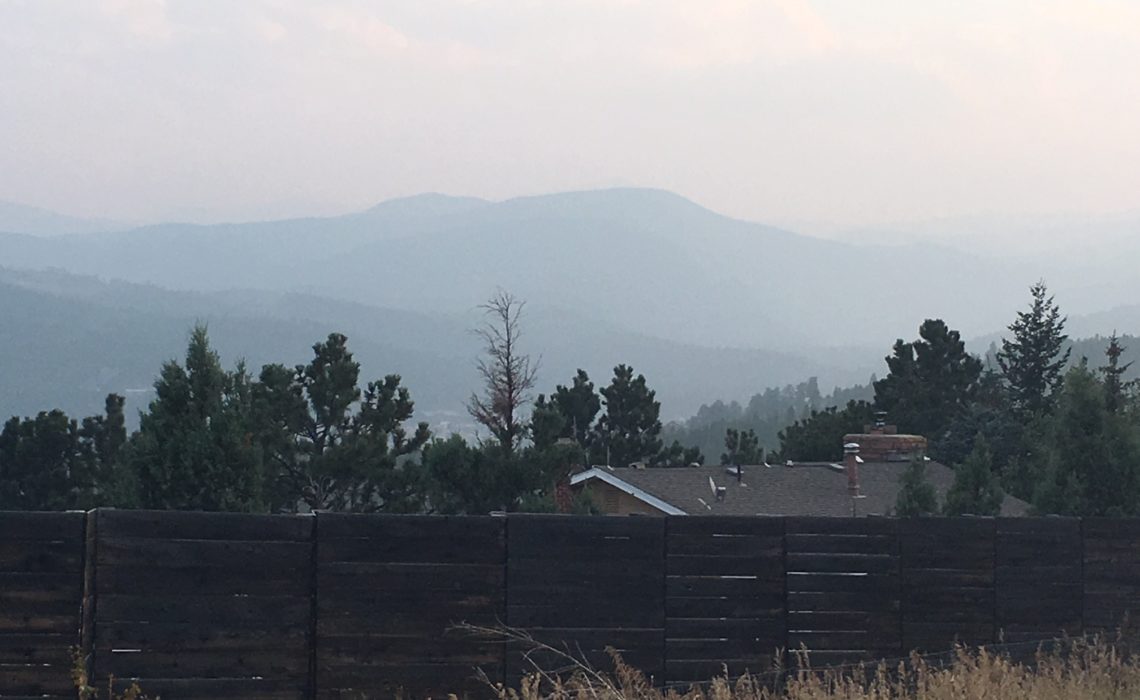 As I walked out of work, the air felt thick and grainy.  Driving down the street,  I glanced towards the Flatirons and was flabbergasted.  The mountains were gone, buried behind a gray, smoky haze.  Instead of the quintessential blue sky day where I could easily spot Longs Peak and Mt. Meeker, the air was clogged with particulate matter.

I’ve spent a lot of summer days in Colorado, first as a kid with my family and then the last ten years living here.  And I have never experienced a summer quite like this where fire and smoke are the new normal.  Living at 8,200 feet, we don’t have air conditioning, which isn’t a problem, because the nights are cool enough to provide good sleeping weather.  We typically put the fan in our window to produce that nice breeze.

But add in smoke, and it’s not so great to have those windows open.  The other night, all I could smell was smoke.  Not only is it unpleasant, but when you are worried about wildfires, you don’t need to smell it all night long.  Finally, in a fit of desperation, I closed the windows.  Even though it was a bit more stuffy, it felt preferable than the smell of smoke.

I wish this summer was the exception.  But it’s not feeling that way.  Normally, summer should bring thunderstorms and heavy downpours to wash away all that smoke.  But it’s hard for me to remember the last summer we had regular afternoon rain.  Instead, it’s day after day of hot, dry weather.  Even when it rains down in Boulder or Denver, it never seems to make it up to the mountains anymore.

And the headlines don’t provide any hope, as summer after summer, mega-fires are breaking out all over the west.  A mega-fire is a fire that burns more than 100,000 acres — something that used to be an anomaly.  Now, each summer brings record-breaking fires that burn down hundreds of homes, and burn up forests equivalent to the size of Rhode Island or Delaware.

The last few summers also are the warmest on record, throughout North America and even Europe.  And as the climate continues to warm, wildfire and smoky skies are becoming the new normal.  And the fantasy life I envisioned of living in the Rocky Mountains, with crystal clear views of 13,000-foot peaks is fading.  To be replaced by living indoors with windows closed, trying to stay out of the smoke, and expecting a fire to break out any moment.

This is the new normal living in the mountains of Colorado.