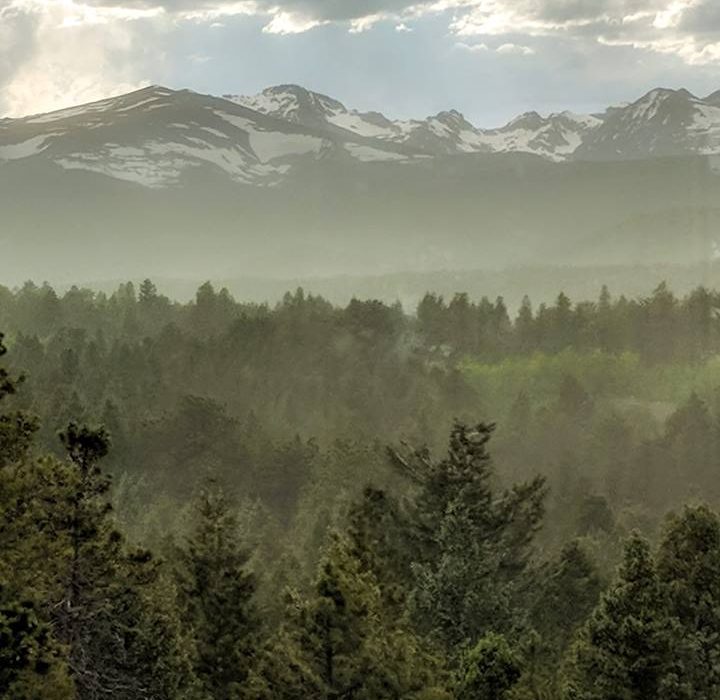 As I drive up Boulder Canyon, dust envelops my car.  Except this dust is not of the brown variety, but rather green.  Clouds of green swirl around me, creating a murky haze that makes it difficult to even see the steep granite walls above me.  It is the season of pine pollen, and judging from the coating of yellow on my car, it is one of the worst in years.

When I get home, the thick yellow coats everything.  My car is speckled with yellow.  As I walk around our deck, my shoes leave footprints in the film.  Even the dog’s nostrils have a coating of yellow around them and her eyes were weeping.  As we took our evening walk, my husband’s nose began to run.  By the time, we finished, his eyelids had swollen.

The Colorado Rocky Mountains are filled with pine trees.  The most common around Nederland are Ponderosa Pine and Lodgepole Pine.  When we think of pollination, we more typically think of pollinators like butterflies, bees and hummingbirds.  They are needed to carry pollen from wildflowers so they can reproduce.

But pine trees reproduce through wind pollination.  Pine trees produce both male and female cones, with female cones near the top of the tree, and male cones closer to the ground.  The male cones are made of exposed seeds with two air bladders that make it easy for the wind to pick it up.  The pollen is very lightweight and less sticky making it that much easier for it to disperse.  Tonight, as we were walking, we simply brushed a branch, and they yellow powder starting coming off the cones.

After the pollen from the male cone lands on the female cone, the traditional pine cone begins to grow.  It will take 2-3 years before the tree produces the woody cone that produces seeds and falls off the tree.

This year, the pine pollen is the worst since we moved here eight years ago.  According to scientists, the reproductive cycles of pines seem to alternate from high peak cycle to low.  Why this occurs is not completely understood.

Some think it may have to do with weather, some with other wildlife.  In heavy pine cone production years, the seeds of the pine can outnumber the wildlife who nibble on it.  In leaner years, squirrels, mice and birds may consume most of the seeds, leaving little to reproduce.

Drier, windier weather seems to exacerbate the clouds of pollen.  Unfortunately for us allergy sufferers, the peak of pine pollen season coincides with one of our driest months of the year, June.

So the only thing that will end the misery of the green clouds is a good rainstorm or hiding inside for the next two weeks.