The little pika that could 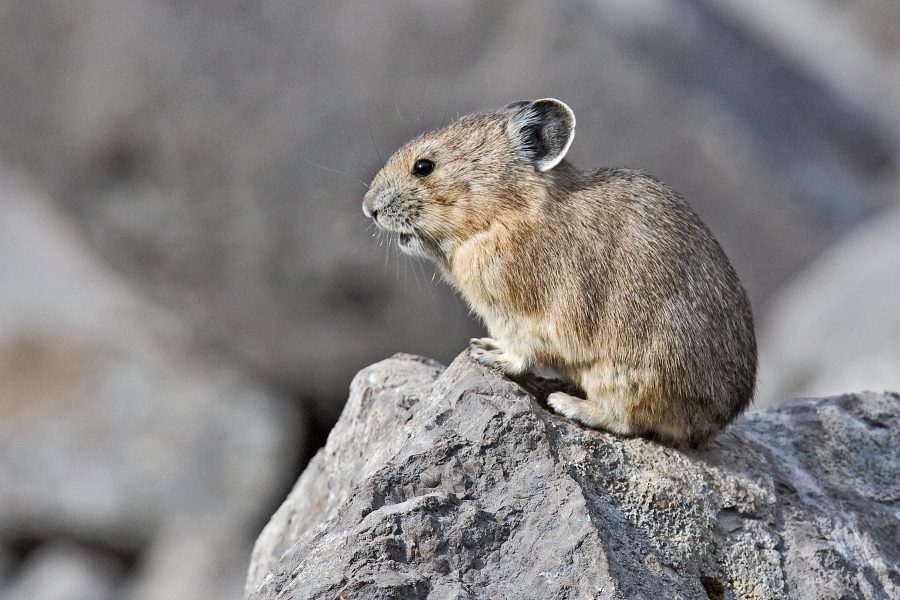 Pika in the Rocky Mountains

Hiking up the endless switchbacks, we have now left the trees behind.  Mountains come into view — vast soaring peaks of 14,000 feet and more of granite.  The terrain is covered in boulders with an occasion scant piece of grass or wildflower in it last stages of bloom before the first hard freeze kills it. The farther we head up towards our destination, Mt. Yale, the fewer forms of life there seem to be.  After all, what could possibly survive up in this harsh environment?  I can only imagine how incredibly cold, windy and snowy this place will be comeDecember.

Then a blur of something furry catches my eye.  It zips by so quickly I can hardly see what it is.  Is it a mouse?  It can’t be a marmot, because they are usually chubby and slow.  But whatever this thing is, it is on the move.

There it goes again.  For a split second I catch a better look, small, compact body, gray fur and small ears set close to its head.  Meep!  Meep!  I hear it calling out as it scurries in and out of the rocks.  I catch another glance — it looks like it’s carrying something.  In fact, it’s got a bundle of greens hanging from its mouth.  Running underneath the boulder, it pops back out.  The greens are gone and it is zipping over the tops of boulders once again.

The pika is that rarest of animal that can actually survive in the alpine environment.  During our recent summit hike up Mt. Yale, pikas abounded.  In fact, they were pretty much the only living thing I remember seeing above 13,000 feet other than the few other hikers we encountered.

The pikas are busy.  The old saying is “busy as a beaver”, but I don’t think any living thing could be more in a constant state of motion than the pika right now.  They are battling the deadline of winter weather coming.  At 13,000 feet, it won’t be long until the snow starts flying (maybe within the next two weeks).  And once the snow starts piling up, “haying” season will be over.

Pikas are part of a group of wildlife that “tolerates” their environment during winter.  They don’t go to sleep, they don’t migrate down to the plains, they stay put in one of the harshest, inhospitable places where few things can stay alive — the alpine tundra.  And they do it, by spending a few short months, gathering every green plant they can find and taking it back to their den to build up their food cache.  Because that food cache is how they will eat and survive during the long winter ahead.

Their window to “hay” is short.  Up on the tundra, the growing season only lasts a few weeks, really late June to early September.  Then the temperatures start to drop sub-freezing, and the jig is up. Pikas are so industrious that they can cache up to a bushel of plants in preparation for the winter.  For such a small animal, I find that amazing!

As the world around us warms up, the pika’s habitat is threatened.  With winters getting warmer, trees are creeping higher and higher up the sloeps, making the tundra habitat smaller.  The pika can only live on the tundra.  As a rodent, it makes for desirable prey for foxes and coyotes, and if the woods encroach, so will the other critters that will eat the pika.  If you can’t get behind changing behavior for climate change for yourself, do it for the pika.  How can you possibly resist this fuzzy little creature?

So as I try to put in my last hikes in during these past few weeks, I listen for the tell-tale call.  Meep!  Meep!  I know the pikas are hard at work and won’t rest until they’ve gathered every last plant they can.