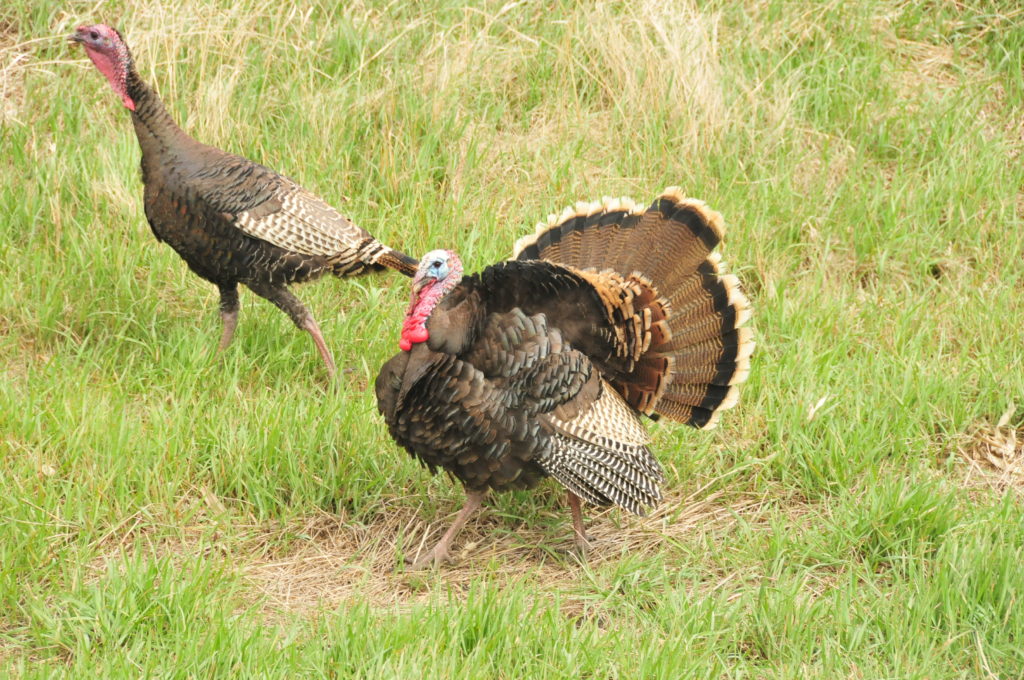 First, one appeared at the side of the road.  Then another.  Pretty soon, a gaggle of the large birds strutted across the road, scurrying quickly on their spindly legs while carrying their large, rotund bodies.  It’s their size and yes, that neck, that scrawny, jiggly, turkey neck with the waddle hanging down that is the tell-tale give away.

With the nation’s holiday fast approaching where the main dish centers on turkey, it’s hard to think of this bird as wildlife that not long ago was considered a threatened species.  Though turkey’s were abundant when the pilgrims arrived to the new land in the 1600s, three hundred years later they were mostly wiped out.

In Colorado, the turkey native to the state is the Merriam’s Turkey, found in the Front Range foothills and the Grand Mesa in Ponderosa Pine and Aspen forest, very similar to the habitat found around our Nederland home.  Though I haven’t seen wild turkey on our property, I have seen them on the Forest Service land, in county parks, and even at Rocky Mountain National Park.  They feed on the seeds of the Ponderosa Pine as well as a variety of berries most commonly, but have been known to augment their diet with spiders and grasshoppers as well.  This native Colorado turkey weighs in between 14 and 22 pounds once full-grown.  Their tell-tale feature that differentiates them from other turkeys found in the U.S. are their white tail feathers.

In the 1980s, the Colorado Parks and Wildlife agency made a concerted effort developing strategies to boost native turkey populations.  Thirty years later, turkeys are now found in 53 of the state’s 63 counties, and populations are so abundant, a turkey hunting season has been instituted.  So, if you’re truly motivated to obtain the freshest of turkeys, feel free to obtain a permit and start hunting!  But that requires a bit of planning as the season usually ends in late October.

Though most of us revere the bad eagle as our symbol of freedom and the bird that represents our nation, in fact, Benjamin Franklin thought otherwise, suggesting the turkey as more symbolic of the new nation:

“I am on this account not displeased that the Figure is not known as a Bald Eagle, but looks more like a Turkey. For the Truth the Turkey is in Comparison a much more respectable Bird, and withal a true original Native of America… He is besides, though a little vain & silly, a Bird of Courage, and would not hesitate to attack a Grenadier of the British Guards who should presume to invade his Farm Yard with a red Coat on.”