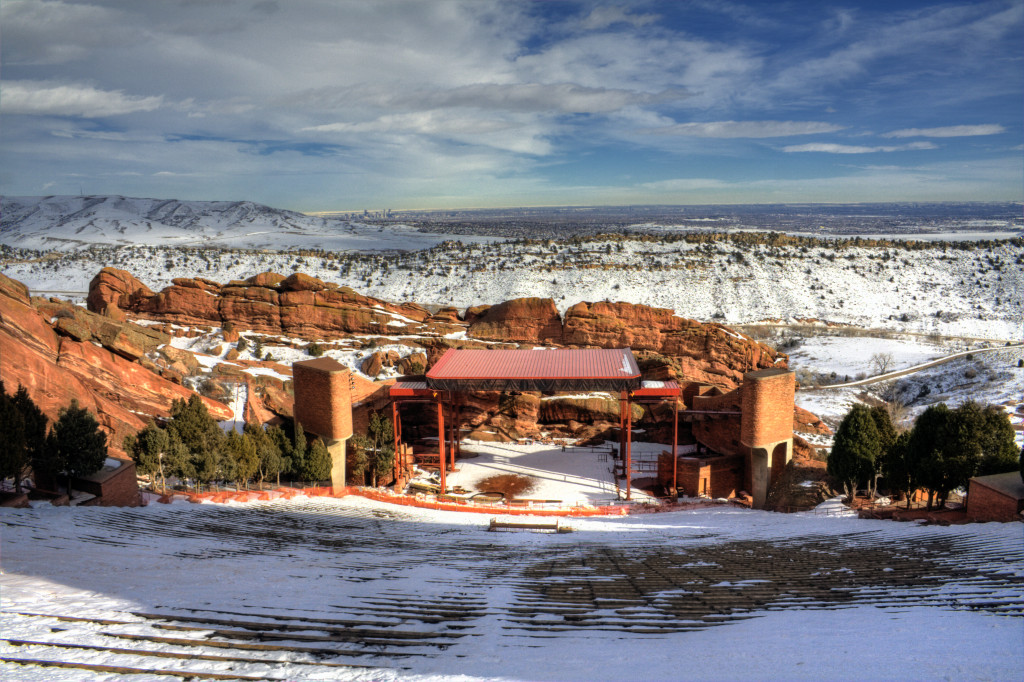 When a blizzard hits Denver in March, some crazy things can happen.  Denver International Airport closes for the first time in a decade.  Every major highway on the front range closes.  Federal government buildings completely shut down for the day.  But the one thing I didn’t expect to read about it, after the great blizzard of March, 2016 was about Red Rocks Amphitheater.

As one might imagine, when snow hits in Colorado, lots of people headed west on I-70 to the ski resorts.  A powder day is a big draw for the thousands of people that love skiing (me included).  But apparently, a resident of Lakewood, a suburb of Denver, had it on his bucket list to ski the amphitheater at Red Rocks.

Red Rocks Amphitheatre is one of the greatest outdoor venues for concerts in the world.  I’ve been lucky enough to have attended a handful of concerts there (during the summer of course), and every time I’ve been blown away by the scene.  The thousands of people perched among the orange and red boulder hillside above Morrison, Colorado — staring at the stars and the lights of Denver below.  On top of that, the acoustics are out of this world, which makes for an incredibly memorable experience.

The seating for the amphitheater is composed of wooden benches arranged up to 100 rows, ascending some 300 feet above the stage.  So getting enough ski to completely bury the benches is no guarantee.  In fact, it would require a good 2 to 3 feet of snow, something that probably hasn’t happened in Denver in 4 to 5 years or more.

But this most recent storm was a whopper, and indeed places in Denver and its suburbs got two feet of snow or more.  And so around 5 pm on Wednesday evening, when the snow had stopped following, Nick Gianoutsos and his girlfriend made the trek to Red Rocks, not knowing if they would find enough snow to pull off the feat.  Yet, when they arrived they found the benches buried, and he strapped on his skis and away he went, making several turns before arriving at the stage.  I wouldn’t have believe it myself, but just to make it official, his girlfriend filmed the event, and it was featured on the local news.

Well, that’s one for the both the bucket list and record books, and may not be replicated for years to come.