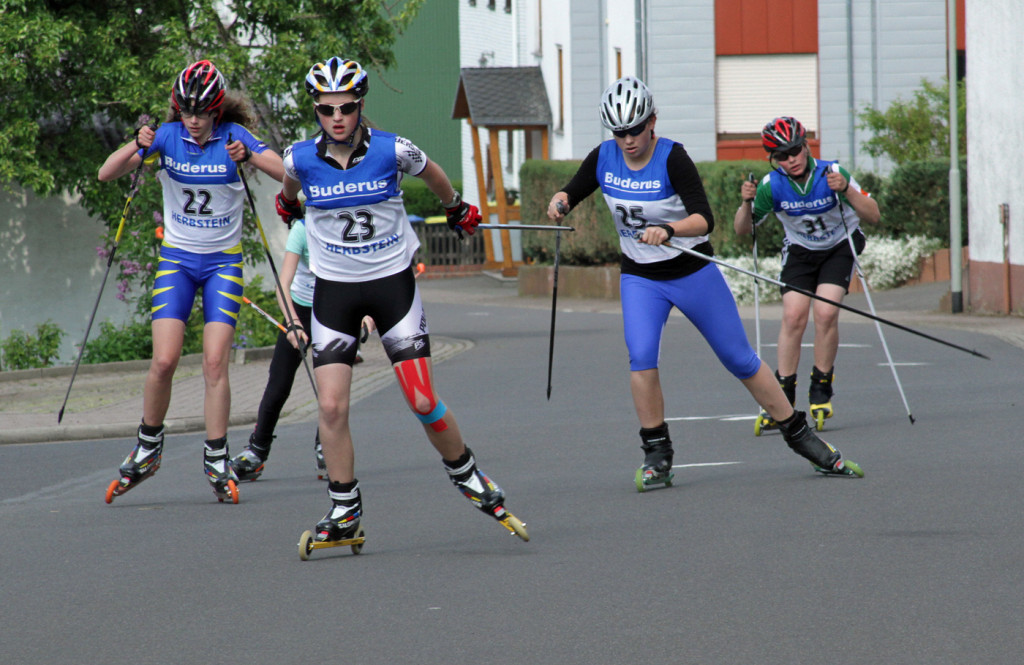 During my morning drive to work, typically I see lots of bicyclists on the roads, a familiar sight.  But recently the last couple of weeks, I’ve seen men and women whizzing on the side of the roads on a different set of wheels.  Wheels that are much smaller and attached to long skinny bars  roller skis.  Now unless you too live in a hotbed of nordic skiing, you may not be familiar with roller skis.  However, if you were around during the 1990s, you may instead remember something similar  roller blades.

Roller skis, on the other hand, are not for the faint of heart or the inexperienced skier or athlete.  Unlike roller blades, roller skis are much less stable because of their length, and have no braking mechanism.  They have a metal bar that is very skinny with one single wheel up front and one in back.  They were first invented in the 1930s, but really became more popular with nordic competitors in the 190s as a means of training during the summer months, where they can use similar techniques to skiing on the snow.  It has become such a popular sport now, that they actually have competitions just for roller skiing.  In Norway, where nordic skiing is the national sport (akin to baseball or soccer in other countries), they have built stand alone roller ski facilities so people can “ski” safely off the public roads.

My brother at one point was serving as a rep for a Roller Ski company here in the U.S. and graciously gave me a set as a gift.  I tried them out one time, and was pretty sure I was going to die.  It’s sort of the feeling people get when you first try cross country skiing on those skinny skis, but worse, because if you fall instead of landing in nice, fluffy snow, you’re going to hit the hard, unforgiving asphalt.  Much like cross country skiing, going down hills seems to require the most skill, or perhaps fearlessness.  You have to get yourself to just go for it, because once you start leaning back, the “skis” race away and you will hit the deck.  After one go round with the roller skis, I ended up selling them to a friend who was much more skilled and experienced than me.

Still, because I love actual skiing on snow, seeing the roller skiers cruise around the roads of Boulder brings a smile to my face.  Because seeing them reminds me that real skiing on real snow isn’t too far off, and that’s the kind of skiing this mountain woman likes doing.